The Wall Street Journal – Stocks are up in the UK for rat traps, sacks and kits after analysts say there may be a huge need for such items because a man was going to St. Ives. Of course, these are the same inside traders who touted Enron, steam locomotives and the New Coke.

Variety – Boffo Mystery Thriller: Latest scoop from across the pond is that “a man,” (hackers report it’s Tom Cruise on crutches), comes across another man (Johnny Depp?) with several beautiful babes carrying microchips and tapes, disguised as mice, cats and rats, stolen from the evil Capt. Drano. Working title: Mission Improbable. Our moles in the ‘Wood tell us a pirated copy is easily accessible on the Weather Channel. Also, new musical for Broadway, Cats With Rats, although there is a lawsuit pending by Andrew Lloyd Webber.

Press release from FEMA – Death and destruction have hit St. Ives, a small village in England, and our rescue workers are on the way as soon they complete their work along the Texas Gulf Coast, which they are still trying to find.

Fox News – A woman, identified only as Hillary C., was caught trying to smuggle bombs, unused at Benghazi, for ISIS terrorists to blow up an innocent English village, according to what someone said. President Trump, our noble leader, in a 20-second news conference on the third tee, claimed there was blame on both sides: “Cats like rats. Which reminds me, those rats in the White House who are leaking the truth will be hunted down and sent to Guantanamo Bay – a beautiful place for my next spa, beach and water boarding – for enhanced interrogation. Only seven wives? What a bunch of losers.”

Local TV News – This just in! Rats, cats and kittens are running wild right here in our town! Well, not exactly here, but somewhere, just like when we can’t show a good car wreck or apartment fire from here, we’ll show you one from Waco or Detroit or, once, from Johannesburg, South Africa. Remember that one, Sue? Sure do, and by the way, Chip, that’s a nice tie you’ve got on. I’ll bet your wife gave it you. No? Quickly moving on, we’ll be right back with World War Three after these messages.

Press release from the NRA: A small English village has been pillaged by a horde of rats because those cowardly Limies won’t allow residents to carry unregistered AK-47s, much less a decent howitzer, so what can you expect? Defend the Second Amendment or America will also be overrun with rats, cats and sacks. Meantime, give your wives a pink pearl handled Smith & Wesson, just the thing for your next anniversary.

MSNBC – A fascist plot to harm the residents of a quaint English village was thwarted by a brave liberal watchdog when he spotted a man, no doubt a conservative Mormon because he had seven wives, with rats which, scientists say, can carry the bubonic plague. Our sources report Special Prosecutor Robert Mueller is investigating a link between this potential epidemic and the White House, specifically the President’s immediately family, plus those on his staff, groundskeepers and most visitors. Subpoenaed emails clearly show that Jared Kushner has used “met,” “going” and “seven” in his messages to, who knows, the Kremlin?

The New York Times – St. Ives, England – A man (homo sapien) was going to this village in Cornwall, a busy fishing port, where he came upon another man with many cats (Felinus) to stop the rats (Rattus) destroying the fishing (Swimeus) gear, although some people argue it was St Ives, Cambridgeshire, an ancient market town and therefore a distinct possibility. Reliable sources say that if the traveler met the group leaving the town and coming towards him, then the correct answer is one, the narrator. But if he overtook them, all going the same way, then the answer is 2,802: 1 man, 7 wives, 49 sacks, 343 cats, and 2,401 kits, plus the narrator. See: Pages 4-12 “History of St. Ives (1340-2017) and Cambridgeshire – Bastion of market towns,” a special 14-page section: “British Country Roads in Need of Repair,” and our lead editorial: “Animals in Sacks — how long the cruelty?” 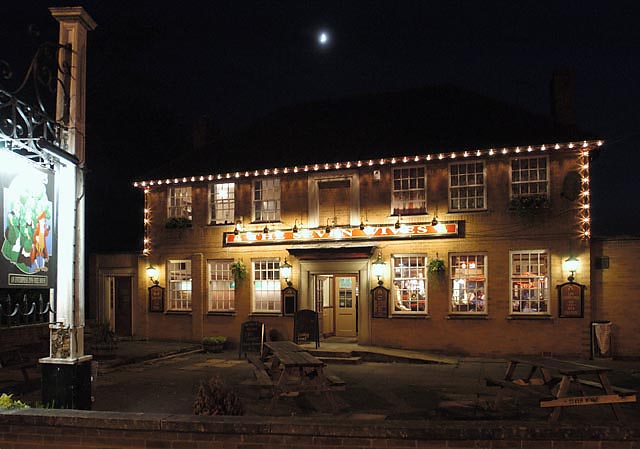 Exterior of the Seven Wives public house in St Ives, Cambridgeshire, on a summer’s night. By David Bartlett.

Press release from the ACLU – The British government must take steps to rid towns bearing religious names. St. Ives is the perfect example of mixing church and state. If the British can cut ties with the rest of Europe, then certainly they can rename the hundreds if not thousands of towns, streets and, yes, cathedrals, smacking of religion. God help us all!

ESPN – How about this blow-out? The St. Ives Wives scored 7, with seven sacks, while the Cats had 343 and the Fightin’ Kits with a huge 2,401. Remarkable, eh, Rabid Robert? Hey, Rabid Robert, I’m talking to you. Sorry, but he’s had 12 concussions and doesn’t communicate very well.

Tweet from unknown source at 1600 Pennsylvania Avenue, Washington, D.C. – President Donald (The Great) Trump visited the Texas Gulf Coast to lend his magnificent presence to those poor (under $100 mil) peasants drowning in a crystal clear sea of oil and mud. They were glad to view in person His Trumpship, and asked for his blessing and $30 trillion. The record-sized crowds continued to shout an old Texas expression about retrieving their vehicles from the flood: “Get a rope!”#your welcome

Mother Goose – Kits, cats, sacks, and wives.
Such a cast gives me the hives.
Like rock-a-by baby, who fell to his doom.
Or Humpty Dumpty they ate with a spoon.
Jack fell down and broke his crown.
Who cares how many went to town?