Virtuosi of Houston Prepares to Dazzle and Delight Supporters with Honorees, Musical Performances and Cuisine at 15th Anniversary Gala on May 7

Virtuosi of Houston (Virtuosi; www.virtuosiofhouston.org) will celebrate its 15th season of excellence in chamber music education and performance at its gala on Saturday, May 7, at 6 p.m. in the Legends Ballroom at the Hotel InterContinental. Supporters and guests of Virtuosi of Houston are in for a dazzling evening at the concert and dinner event, entitled “Virtuosi Encore 15: Honoring Houston’s Music Philanthropists, an Evening of Memories and Music,” with a menu of delectable cuisine, performances by special musical guests and by the Virtuosi of Houston Youth Chamber Orchestra, and an exciting silent auction. The gala will also honor 12 Houstonians who have contributed to the tremendous success and continued growth of classical music in Houston.

Linda and John Barrett and Zarine and Meherwan Boyce are serving as co-chairs of the event, along with honorary chair and gala honoree Monzer Hourani. Additional honorees for this year’s gala include Margaret Alkek Williams; Donna and Robert Bruni; Barbara and Ulyesse LeGrange; Nidhika and Pershant Mehta; Mary Kay and Michael Poulos; and Phyllis and Cornel Williams.

Also in the spotlight will be the musical performances of the evening from the Virtuosi of Houston Youth Chamber Orchestra and two special guest performers: acclaimed Broadway singer and actress Michelle DeJean and international opera singer Gabriel Gonzales. 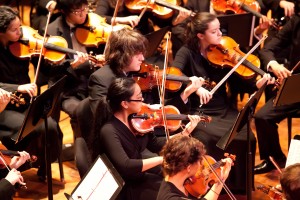 DeJean, a Houston native, will be singing “As Long As He Needs Me” from the musical Oliver! DeJean is a past performer with Theater Under the Stars and the TUTS Humphreys School. She was a Houston Ballet Academy student as well as a graduate of the High School for the Performing and Visual Arts. She recently finished a run as Roxie Hart and later as Mona Lipshitz in Chicago on Broadway. In additional to starring in more than a dozen regional musical productions, she has performed in national and international tours of West Side Story (Anita), Mame (Gloria Upson), The Sound of Music (Liesl) and Jesus Christ Superstar.

Gonzales, a celebrated opera tenor from Mexico, will be performing “Granada,” by Augustin Lara, as well as “Dime que si,” by Alfonso Esparza Oteo. Gonzales has led an illustrious opera career. In addition to numerous recitals and opera productions in the United States, Mexico, Russia and Spain, Gonzales has sung several roles for productions at the Houston Grand Opera, including Don Alvaro in La forza del destino, Rodolfo in Luisa Miller, Manrico in Il Trovatore, Romeo in Romeo et Juliette, the title role in Faust, and Rodolfo in La Boheme. Among the highlights of his career are his portrayals of Federico in the American premiere of Cilea’s L’Arlesiana, Don José in Bizet’s Carmen and Corrado in Verdi’s Il Corsaro for Sarasota Opera.

In addition to performing with DeJean and Gonzales, the students of the Virtuosi of Houston Youth Chamber Orchestra will present a concert of both classics and pops. Under the direction of longtime Virtuosi of Houston conductors Franz Anton Krager and Andrzej Grabiec, their performance will include soul stirring excerpts from “Overture 1812” by Tchaikovsky, the “Adagio” from “Concierto de Aranjuez” by Joaquin Rodrigo, and a new, yet-untitled piece by University of Houston composition professor Robert Nelson.

Executive chef Peter Laufer of the Hotel InterContinental has created a menu of some of the most delicious and memorable dishes from the past eight Legends events. Laufer brings years of culinary experience and creative flavors to his dishes from years of cooking for top restaurants around the world, including Germany, South America, the Caribbean, Russia, Canada, Scandinavia, the United States and the Mediterranean. This year’s menu includes past gala favorites like goat cheese profiteroles, duck empanadas and smoked salmon for hors d’oeuvres, lamb shank bathed in red wine reduction with parsley potatoes and root vegetables, and a signature dessert: a chocolate piano paired with lemon soufflé, fresh berries, and apple tart.

Aside from the delicious food and entertainment, the gala will have more than 200 distinctive items available for silent auction, from winery tours to exquisite jewelry.

Tickets for the May 7 gala are available exclusively through Virtuosi, and may be purchased by contacting the group directly at 713-807-0888. Gala tickets range from $250 to $2,500 per seat.

For more information about Virtuosi of Houston or the gala, or for a full list of sponsorship opportunities and benefits, please contact Zarine Boyce at 713-807-0888 or send an email to virtuosi@virtuosiofhouston.org.

THE YULE TIDE IS OUT THE DINING ROOM

May 6-May 16 Galleria's Spring Primavera

Ice Spectacular at The Galleria