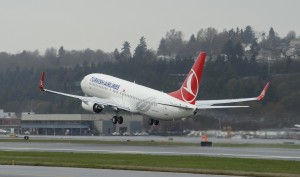 Houstonians can fly direct to Istanbul on Turkish Airlines, one of the world’s fastest growing airlines.

“The direct flights to Istanbul will strengthen trade, investment and tourism ties for Houston in Turkey,” says Houston Mayor Annise Parker.  She recently led a trade mission to increase economic relationships between the two markets.

In an interview with H Texas, Turkish Airlines’ Chairman of the Board and Chairman of the Executive Committee, Hamdi Topçu, talked growth. “Our airline has grown more than 20% each year and now serves 98 countries. Turkish tourism is increasing as people discover our best hotels, the Aegean Sea and plenty of history.”

Topcu say’s the future looks even brighter, “When people come to Turkey for commerce, they come back with family. We are the gateway to Africa, the Middle East and all of Europe.”  He believes the highest quality of service will keep people flying Turkish Airlines.

Houston was a natural expansion choice for Turkish Airlines. Houston is the fourth largest US city in terms of population and home to thousands of Turkish residents, creating an immediate passenger base.

TOMB IT MAY CONCERN

NOT READY FOR CRIME TIME

Splendor in the Sand: The Atlantis

5 New Things to Do in Galveston This...

The Search for Manatee