Mapping Out the Best Barbecue Joints in the Lone Star State 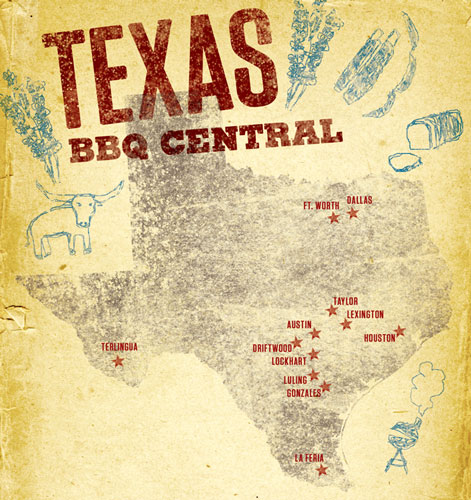 Live in Texas for more than five minutes—or just visit some weekend—and before you can say “Howdy,” you’ll find yourself standing in front of an old Texas barbecue joint. Someone will undoubtedly claim this place has the best barbecue in the state, and you’ll wonder if it’s true. Soon you’re standing knee-deep in spare ribs, leaning over slabs of brisket laid out on butcher paper and licking barbecue sauce off your wrists—that is, if you don’t accidentally burn your boots when stepping over a fire pit in the floor.

Chances are the barbecue joint will be an old, third-generation, family-run, small-town kinda place with walls the smeary color of smoke-cured meat. A neon Lone Star beer sign hangs on the wall, old men in baseball caps stand in line, and little green Coca-Cola bottles carry a thin film of ice that slides away as you lift them from a stand-up metal cooler.

Barbecue, and all the quirky small-town places that serve it, is a long-revered Texas tradition as important to the rich cultural mythology of the Lone Star State as cowboys, cattle drives, boots, faded jeans, “Faded Love,” Willie Nelson and The Alamo. Barbecue is a kind of religion for Texans: Places that serve it are like churches with loyal congregations who attend regularly and sometimes feud, split and start their own place down the street.

Barbecue joints that Texans love best are imbued with an elusive Last Picture Show quality that seasons the experience like a black pepper rub on a brisket. (Hollywood couldn’t build sets this unbelievably cool.) A place can have the most tender barbecue, but if folks don’t stand in line for it in an old store-front building with a squeaky screen door, an antiquated water-cooler system hanging from the ceiling, dusty deer-head mounts on the walls and a fire roaring in the floor, it’ll never get on the barbecue map of Texas.

A few popular spots like The Salt Lick (which is not quite old school/cool enough to make the popular Texas Monthly magazine’s “best barbecue” list complied every five years) have become so famous that they get write-ups in The New York Times and land a food court kiosk at the Austin airport. Other hometown hole-in-the-wall spots, like Snow’s in Lexington, have only in recent years been “discovered” by food writers and the rest of the brisket-eating, pickle-chomping, pick-up-driving proletariat.

But let’s just suppose you’ve never been to the Lone Star State and don’t know where to start in your search for great barbecue.

It’s easy. Put your finger in the center of a Texas map and eat your way out from there. Texas is “barbecue central,” and so our list begins at the heart of it all near the capital city of Austin in the south-central part of the state. After that, it’s a short drive to small towns that spoke-off in all directions from there—places like Taylor, Driftwood, Lexington, Luling and Lockhart where city slickers and Texas “kikkers” concur the best barbecue begins.

Smoking meat here since: 1900
(Note: Smitty’s was renamed/re-opened by the late owner’s daughter after she and brother Rick had a feud/split in 1999.)

Atmosphere: The best, bar none. A long room of smoke-stained walls still has little chains nailed to them where butcher knives were once attached “so people wouldn’t walk off with them or get stabbed in a fight,” says Nina. A local post oak fire blazes in the ground, enveloping you in smoke while you stand in line for meat. The parking lot is a sea of chopped wood.

Barbecue: So good that for years the owners refused to serve sauce—didn’t want it interfering with all the rich and subtle flavors of the meat slow cooked over an open post oak fire. Seem extreme? Yeah, but the brisket is that good.

Sauce: Zesty and tart (if you ask for it, they’ll serve it—but only under duress).

We love it because like most Texans, we’re loyal: Barbecue has been smoked on this spot for more than a century. A family squabble forced a name-change (Kruez Market—pronounced “Kriets” to “Smitty’s”) when a sibling opened a new barbecue joint under the old name (though they claim to just run their sane business in a new location). Either way, the name changed, but the quality here didn’t. Locals took sides in the split, and many refuse to patronize the new Kruez Market. Some folks still call Smitty’s by its former name only to sigh and say, “I mean, you know, the Old Kreuz’s.” Nice also that it’s open on Sundays.

Downside: Long lines out the back door.


Who eats here: Everybody. James Beard Award-winning celebrity chef John Besh of New Orleans once told me he loves this place.

Best in the state? Arguably.


Side dishes: Beans, sauerkraut and more.

Downside: They barbecue their meat faster than most (in 4 hours). No BBQ sauce—bummer. Closed Sundays—bummer.

Who you’ll see there: Austinites and those who side with the son in the family feud.

We love it because: They carried burning coals in a steal tub from their original location so they can say they cook over the same coal fire their Granddad did.

Best in the state? Some say so, but not me.

Atmosphere: Laid back and “keep Austin weird” friendly. Set in the country outside town.

Side dishes: Big rings of sausage and generous sides of potato salad.

Who eats there: Celebs like Sandra Bullock and Matthew McConaughey, who are sometimes spotted here, and Austinites who don’t think anything of the 20-minute drive to Driftwood consider it an “Austin tradition,” even though it’s not actually in Austin.


Sauce: Zesty and sweet; mustard based.
We love it because: We can sit outside in the shade of enormous oak trees and bring our own beer and wine—even a giant ice chest full. Live music under the stars—how very Austin of them.

Downside: Long hot summer waits, though you can sit at picnic tables outside.

Best in the state? No, but it ain’t bad.

Barbecue: Tender, marbled but not too fatty.

Sauce: Zesty and sweet—spices float to the top—my favorite. For years, I’d pick up sauce from here and then drive 15 miles farther to Smitty’s because my favorite BBQ place didn’t serve sauce. Lucky for me, City Market sells the sauce by the cup, pint, and even the gallon in Styrofoam containers.

We love it because: Luling is home of the “Watermelon Thump” festival.

Who eats here: Locals, farmers and everyday folks from San Antonio, Austin, Houston and beyond.

Best in the state? Pretty darn close to it.

Sauce: Forget it. Even loyal fans of this place say “Don’t order it.”

We love it because: They keep Texas’ own Shiner Beer on tap.

Who goes there: Locals and Austinites who don’t mind driving an hour to Taylor.


Best in the state? Usually makes all the “top 10” lists.

Atmosphere: Fantastic. Sit outside by the pits.

Barbecue: So good they sometimes sell out in just a few hours. Tender, perfectly marbled, moist. Wow. Get it to go.

Side dishes: The usual.

Who eats here: Far too many people.

Downside: Only open on Saturdays. People start lining up around 7 a.m.—and they can sell out as early as 10 a.m. Since 2008, when Texas Monthly named it the best barbecue in Texas, Snow’s works to keep up with demand.

Sauce: Pretty standard, but they do ship it across the U.S.

We love it because: Sweet ol’ “Miss Tootsie” Tomanetz (who turned 76 on the day of this writing) has worked as a barbecue pit master for 45 years and is there every day.

Who goes there: Morning people. Don’t go late if you want to eat.

Best in the state? Probably.

Their slogan? Great barbecue “8 Days A Week.” Open since 1932. Claim to be Texas’ oldest restaurant continuously owned by same family.

Legendary for cold beer, good barbecue, great sauce (they bottle it) live music, and a lively Gospel Brunch. Backyard holds thousands as a concert venue where legends like Willie Nelson and Stevie Ray Vaughn have played.

Of course, great Texas barbecue is not corralled like cattle to only the center of the state. Texas is GIANT (it’s more than 850 miles from the Sabine River to the West Texas border town of El Paso), so try one of these other fabulous barbecue joints from all over the state—places whose barbecue makes Texans proud:

Two more locations—the original in Llano (northwest of Austin), and one in New Braunfels (north of San Antonio).
www.coopersbbq.com

This Cooper’s location, near the cattleman’s capital of Texas in the old Ft.Worth Stockyards and just a boot-scoot from Texas’ largest honky tonk “Billy Bob’s Texas,” is home to the “Big Chop,” an enormous barbecued pork chop. Folks swear by Cooper’s brisket, ribs, chicken and hearty side dishes, too.

Located 24 miles northwest of the south Texas border town of Brownsville, Wild Bill’s “represents the frontier spirit with its great Texas decor, and Bill plays his part to the hilt, complete with a very impressive handlebar moustache, and well-used hunting knife hanging from his belt,” according to filmmakers in Barbecue: A Texas Love Story.

When most Texans hear the word Terlingua, they think of chili, because this old West Texas ghost town is home to the Terlingua International Chili Championship. But these days Terlingua is also known for great, wood-fired barbecue. La Kiva, a bar and restaurant “cave” built into an area dug into a hill in the Big Bend RV Travel Park, features award-winning barbecue that earned awards in at least a dozen barbecue cook-off competitions. Featuring three stages with large music and pit barbecue, La Kiva is the creation of owner Gary Felts. Anyone famous ever come around? At this writing, former President George W. Bush is there doing a mountain bike ride in the area with a Wounded Warriors group.

With smoky ribs, oh-so-sweet barbecue sauce, and sassy old Thelma at the pit, even at this new location (the original Thelma’s burned down), you’ll find yourself in barbecue bliss. City slickers, turn off your cell phones: Thelma refuses to take your order if you’re on a cell phone—a rule she posted on the wall near another that says “no service if your pants are sagging.”

Peggy Sue is known for her great veggies as well as her fine barbecue. This place is sure to please both vegetarians and carnivores, with great barbecue and some special lightly steamed vegetable side dishes, too.

Waking Up The Importance Of Sleep

Non-Stop Flight on United from Houston to Vail...