On April 5, 6 and 7, the Houston Symphony invites audiences to enjoy an evening of pieces written and performed by some of the world’s greatest Spanish musicians. Welcoming world-renowned conductor Carlos Kalmar and award-winning classical guitarist Pablo Sainz-Villegas, the Symphony promises a concert highlighting the work of talented Spanish composers Ginastera, Rodrigo and Falla. The concert will begin with a traditional favorite, Haydn’s Symphony No. 37, and will then segue into Ginastera’s dynamic Variaciones Concertantes. After intermission, the orchestra and its guests will return to finish the evening with Rodrigo’s Fantasia for Guitar and Chamber Orchestra and Falla’s Three Dances from El Sombrero de tres picos.

Written in the mid-20th century, Ginastera’s Variaciones Concertantes is a cosmopolitan approach to the traditional romantic melodies of Argentine folk music. The piece was written after Ginastera ventured to America from his native Argentina and is a beautiful example of the profound impact his journey had on his compositions.

Following Ginastera’s rhythmic energy, the evening will continue as the orchestra invites Sainz-Villegas on stage for Rodrigo’s Fantasia for Guitar and Chamber Orchestra. Hailed as the last of the great Spanish nationalist composers, Rodrigo wrote Fantasia para un gentilhombre (Fantasia for a Gentleman) as an elaboration on six short dances that were popular in Spanish culture and folk music at the time. Arguably the composer’s most famous work, the piece is filled with intense melodic interaction between the guitar and orchestra, passionately expressive swells of instrumentation and energetic rhythmic structures.

In May 2011, he made his New York debut at Carnegie Hall with the Oregon Symphony as part of the inaugural Spring for Music festival. Both his imaginative program Music for a Time of War and the performance itself were hailed by critics in the New York Times, New Yorker magazine and Musical America.

Carlos Kalmar was born in Uruguay to Austrian parents.  He showed an early interest in music and began violin studies at the age of six. By the time he was fifteen, his musical promise was such that his family moved back to Austria in order for him to study conducting with Karl Osterreicher at the Vienna Academy of Music. Before coming to Portland, he served as music director for the Hamburg Symphony, the Stuttgart Philharmonic, Vienna’s Tonnkunsterorchester and the Anhaltisches Theater in Dessau, Germany. 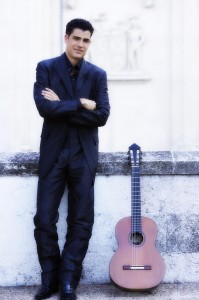 Pablo Sainz-Villegas is hailed by critics as one of the world’s leading classical guitarists. Following his debut performances of the Concierto de Aranjuez with the New York Philharmonic and the San Francisco Symphony, he continues to perform around the world in more than 30 countries as a natural ambassador of Spanish culture. A champion and supporter of new repertoire for guitar, he performed the world premiere of Rounds, the first guitar piece written by Academy Award-winning composer John Williams.

His “beautifully rounded guitar tone” and “soulful rendition” (The New York Times) have made him one of the most sought-after soloists by today´s foremost orchestras, conductors and festivals. Among his 2012-13 season highlights are the New York Philharmonic, Houston Symphony, National Orchestra of Lyon, Chamber Orchestra of Philadelphia, Copenhagen Philharmonic and tours in Germany, France and Japan.

He has performed as soloist with worldwide orchestras including the Israel Philharmonic, Los Angeles Philharmonic, San Fancisco Symphony and the Boston Symphony at the renowned Tanglewood Festival. Along with fellow Spaniard Frühbeck de Burgos, he has shared the stage with renowned conductors such as Carlos Kalmar, Juanjo Mena, Jean-Jacques Kantorow, Alondra de la Parra, and has performed in the presence of the Dalai Lama as well as the Royal Family of Spain.

Sáinz Villegas is the recipient of numerous prestigious awards and was the first guitarist to ever win Spain’s top classical music honor, El Ojo Critico. Prior to winning the famed Parkening International Guitar Competition, Pablo was already the recipient of more than thirty international awards, including the Francisco Tárrega Award and the Andrés Segovia Award.

Known for his outreach programs, Sáinz Villegas is the founder of The Music Without Borders Legacy, a program that seeks to bridge communities across cultural, social and political borders for the benefit of children and youth, which has served more than 10,000 children.

Pablo Sainz Villegas was born in La Rioja, Spain and is currently based in New York City.

About the Houston Symphony

During the 2013-14 Season, the Houston Symphony will be in its 100th year as one of America’s leading orchestras with a full complement of concert, community, education, touring and recording activities. The Houston Symphony is one of the oldest performing arts organizations in Texas whose inaugural performance was held at The Majestic Theater in downtown Houston on June 21, 1913. Today, with an annual operating budget of $28.7 million, the full-time ensemble of 87 professional musicians is the largest performing arts organization in Houston, presenting more than 280 concerts for 280,000 people, including 84,000 children, annually. For tickets and more information, please visit www.houstonsymphony.org   or call 713-224-7575.

You could dance with the Rockettes

Macy’s Hosts Sixth Annual Shop For A Cause...