Stations of the Crosshairs

THE TV –“We’ll be back with more shootings, stabbings — lots of yellow police tape — and apartment fires. Speaking of stabs in the back, have you noticed how much fake news there is on television, in newspapers and social media? You can’t trust the mainstream media, but you know who you can trust? President Donald Trump.”

What? In the middle of my 10 o’clock local news I’m getting this blatant sales pitch for the President? How can this be? The next night I turn on the same station. “Tired of being stuck in traffic, getting junk mail and lied to about global warming? I’m Chip Chap. We here at Channel 0 want you to know the truth instead of the fake news being put out daily, if not hourly, by the left-wing media. We feel as honest journalists that….” 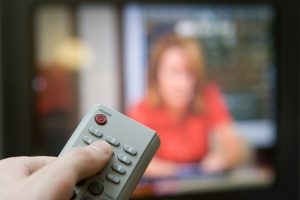 “Why are you reading this alt-right propaganda right in the middle of the program, and making it sound like news?”

“You didn’t get the memo? Our bosses at Sinclair Broadcast Group have sent out orders that we insert their scripts in every news show, up to nine times a week. These pieces are called ‘must-runs’ because they are not a suggestion. It’s mandated, otherwise, as the CIA says, we will be terminated with extreme prejudice. There has been plenty of grumbling from the station manager on down, some are threatening to quit, but thus far no one has, and you know why.”

So it has come to this. There has been unprecedented press bashing, particularly under the Trump administration, but this is a new, and dangerous, wrinkle in the news biz. And who or what is the Sinclair Broadcast Group anyway? I never heard of it, so I check their website and discover it is a publicly traded American telecommunications company controlled by the family of company founder Julian Sinclair Smith. Based in Hunt Valley, Md., the company is the largest television station operator in the United States by number of stations, and largest by total coverage; owning or operating 193 TV stations — including nine in Texas, but none in Houston, so far — in 89 markets.

This number may grow. Sinclair is trying to buy Tribune Media, with 41 stations, for $3.9 billion. Sinclair’s stations currently cover one-third of America and, if the Tribune deal goes through, three-quarters of the nation will have a Sinclair station. Another biased news story, but true: The F.C.C. under Trump has loosened the rules governing how many TV stations any one company can own. This allows Sinclair to buy Tribune Media. The chairman of the FCC, Ajit Pai, led the charge for changing the rules, but the top internal watchdog for the commission found the whole deal and timing didn’t pass the smell test, and has opened an investigation into Pai and his aides. Wonder if this story will make the Sinclair news?

But it is not a TV network like CNN, Fox or NBC. Sinclair owns or operates local stations including all the major networks affiliates, plus the CW, Univision to the WeatherNation. This allows Sinclair to control what you see on those stations. For example, the Friday, April 30, 2004, edition of “Nightline” consisted entirely of Ted Koppel reading aloud the names of some 700 U.S. servicemen and women killed in action in Iraq. But Sinclair, being an ultra-conservative voice that supported President George W. Bush and his Iraqi War, refused to broadcast that show, on its — at that time — seven ABC affiliates. So viewers in those cities never saw the show.

A week later I try to watch my Sinclair station again. “This is Chip Chap with the latest news about gun control, that commie liberal movement to take away your God-given right to own and shoot a 105 howitzer in your backyard if you wish.” Lordy, Sinclair is out-Foxing Fox. “But the mainstream media is shoveling out fake news. You can only rely on Chanel 0 for the truth.” The network has a Terrorism Alert Desk which daily carries items aimed at scaring the bejesus out of its viewers, and there is commentary by Boris Epshteyn, a former Trump spokesman. Here’s an actual must-run: Sinclair stations guard against the “troubling trend of irresponsible, one-sided news stories plaguing our country. The sharing of biased and false news has become all too common on social media.” The anchors give no specific examples. Needless to say, Trump tweeted that it was funny to watch “Fake News Networks” criticizing Sinclair for being biased.

Deadspin Media, a sports news site, posted a video showing dozens of news anchors reading the same script about “fake stories.” It is hilarious with all the blow-dried beautiful anchors, standing in front of sets reading KAAA and WWWW reciting exactly the same words as in a chorus. The 98-second video has already been seen by millions of people. MSNBC’s “Morning Joe” did a lengthy segment on the Deadspin video, showing the words being repeated by several robot-looking anchors. Co-host Mika Brzezinski said she was surprised some of the local anchors didn’t refuse to read it. “This looks like something we would mock the Russians for doing during the days of Pravda,” said co-host Joe Scarborough. Dan Rather’s website said that it was “sickening” to watch.

This just in: the network’s anchors can’t afford to quit. If they leave before their contract is up, they can’t take another job in TV for six months, face mandatory arbitration and must pay back as much as 40 percent of their annual salary. That’s practically indentured servitude. I tune in to Sinclair one more time: “You can’t believe the mainstream media, which only presents warped and biased reports. Right. Muffy? Oh, I’m being told Muffy quit because she can’t stand these must-runs from Sinclair. That’s gonna cost her a bunch.” Like the man said, there is “troubling trend of irresponsible, one-sided news stories,” and I just watched one.

THROW IN THE TOWEL

Open the floodgates Houston continues to open its...

NOT READY FOR CRIME TIME

A Dine’s Worth of Difference Houston’s out to...