THE TV – “Nimrod has a good changeup, but isn’t going to make the playoffs. Mugwump, on the other hand, may go all the way.” No, this isn’t a sports show. These are talking heads discussing a political campaign. It isn’t surprising, since there are number of basic appeals to both sports and politics, and in both cases the rest of us get to tell the participants what they should have done. The first similarity is simply that we like to choose sides. Democrats position themselves as underdogs, fighting for the little people, opposing the fat cat Wall Street Republicans, and the cheer for the Mets. Republicans picture themselves as patriotic and God-fearing upholders of traditional American values. They root for the Yankees. Here in Texas we had the Cowboys vs. the Oilers and now the Texans, and it’s easy to figure out who is cheering for whom.

In choosing sides, we tend to salute their virtues and ignore their problems. Baylor fans are still Baylor fans, and there is no such thing as an ex-Aggie. There are even those who would still vote for Donald Trump, while Hillary Clinton continues to sell books. This leads to the nation’s major problem, which is not global warming, Harvey Weinstein or FEMA, but polarization. Some, like Sean Hannity and Rachel Maddow, are getting rich pandering to this divisiveness, the worst since the Civil War. Fox News leads in ratings by stoking the fires of anger and laying blame, so the worst thing that could happen to that network is for Americans to start agreeing.

Take something as simple as mass transit. For some obscure reason, liberals and conservatives take opposite sides on rails, subways and toll roads. Then there are fight over pollution, immigration, gun control and paper or plastic. This polarization is reflected in Congress, the Supreme Court, elections for almost any office and, still even now, Vietnam. When anything of major importance happens in this country, everyone takes sides.

Sports are a little less important than how we run our governments and who runs them for us. I really don’t think God cares who wins the Super Bowl, although there is this observation: “The man is an atheist. He watched Notre Dame play Baylor and didn’t care who won.” Houston sports columnist Mickey Herskowitz once wrote: “There must really be something to religion. People keep comparing it to Texas high school football.” Amen. Not only do we cheer for our candidate or team, we say tacky things about our opponent. During this past presidential election, the anti-Hillary jokes and cartoons I received via email vastly outnumbered the anti-Trump screeds, but maybe that’s because conservatives are funnier than liberals. We have bumper stickers on our John Deere tractors, we put flags and signs in our front yards boosting our side, depending whether it’s a political campaign or football season.

Those who follow politics also tend to like sports. Richard Nixon, a Redskins fan, even drew up some defensive plays for the team. (I always thought that when a member Congress or a journalist thinks of the Redskins as the home team, it’s time to leave, because there’s a whole other country out there and they have lost contact.) George F. Will, one of the last sane conservative Republican pundits, is a life-long Chicago Cubs fans. (He once descried the club as “in the middle of its 100-year re-building program.”). Will detests football as “embodying all that is wrong with America – a committee meeting followed by violence.” George H.W. Bush was captain of his Yale baseball team, and his son, W., was president of the Texas Rangers. This list goes on, but perhaps our major link between politics/government and sports is Teddy Roosevelt. He once wrote, “In life, as in a football game, the principle to follow is: Hit the line hard; don’t foul and don’t shirk, but hit the line hard!” It should come as no surprise that many of his fellow Rough Riders were former football standouts.

Roosevelt received the Nobel Peace Prize for settling the Russo-Japanese War, then came his biggest task: saving American football. It had become so violent in the early 1900s that The Chicago Tribune reported that in 1904 alone, there were 18 football deaths and 159 serious injuries, mostly among prep school players. The Beaumont Express proclaimed: “The once athletic sport has degenerated into a contest that for brutality is little better than the gladiatorial combats in the arena in ancient Rome.” Football was on its way out from school campuses, until President Roosevelt stepped in. Long story short, he saved the game, set up safety rules and created what would eventually became the NCAA. 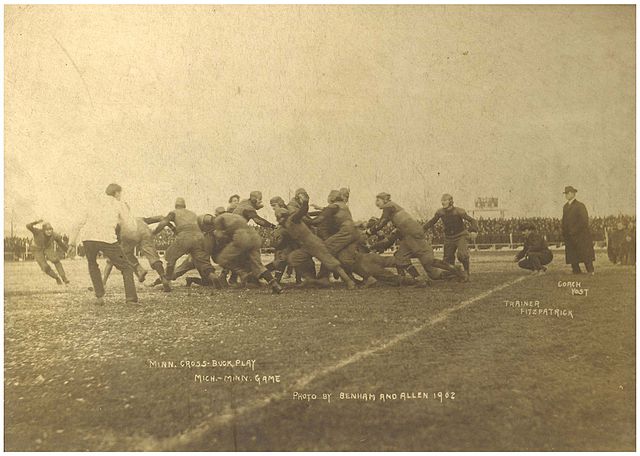 Finally, we have this observation from the bully pulpit about sports, politics and the delightful condescension the rest of us practice. It’s rather long, but good, and I think of this quote every time I read or hear some sports columnist or political pundit waxing eloquent on what should be done: “It is not the critic who counts; not the man who points out how the strong man stumbles, or where the doer of deeds could have done them better. The credit belongs to the man who is actually in the arena, whose face is marred by dust and sweat and blood; who strives valiantly; who errs, who comes short again and again, because there is no effort without error and shortcoming; but who does actually strive to do the deeds; who knows great enthusiasms, the great devotions; who spends himself in a worthy cause; who at the best knows in the end the triumph of high achievement, and who at the worst, if he fails, at least fails while daring greatly, so that his place shall never be with those cold and timid souls who neither know victory nor defeat.”

We bystanders, sports and political fans that we are, should remember Teddy’s observation every time we criticize a candidate or a quarterback. Where’s the remote?

Ashby suits up at ashby2@comcast.net

STATE OF THE STATE

Do We Even Care About Dallas?

ONE MAN, ONE VOTE, ONE STATE