Should Roger Goodell's NFL Get The Death Penalty? 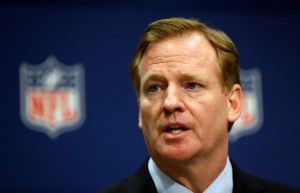 I had intended of my first post here to be more…me. I wanted to show a little bit of who I am and what can be expected in the future when you click a link to something with my by-line, but seeing as how the National Football League, an entity that has its hands firmly gripped around a big chunk of my spare time every fall and winter, has decided to use this week to make a fool of itself I thought I’d lend further commentary on the subject of “Elevator-gate” or whatever lame label the sports media-at-large (read: ESPN) decide to call this latest scandal. I want to present this in a way that I haven’t yet seen it presented so as not to bore you with a rehashing of things already said or written. Hopefully the following doesn’t make you stop and think: “So-and-so said it better”.

I suppose the best thing to do would be to start from the beginning with a little background on this entire ordeal. It all started in a casino in Atlantic City. Baltimore Ravens’ Running Back Ray Rice and his fiancee Janay seemed to be bickering as they stepped into an elevator, the argument quickly escalated to a point where Mr. Rice decided it would be a good idea to land a left cross on his lady’s chin and knock her out. Since unconscious women rarely stand up and walk off of elevators under their own power Rice was forced to grab the arms of the woman he loves and drag her limp form out into the lobby. We, of course, know all of this because casinos have been video-taping every square inch of their properties since it became practical for them to do so, and TMZ has made it their business to acquire any and all embarrassing footage of everyone you’ve ever heard of and broadcast it to the world. What none of us knew, or rather what none of us had seen with our own eyes, until this past Monday was what actually went on inside the elevator between Ray Rice and his, now, wife Janay because only the exterior camera video had been released to the public. Certainly we could infer from the context clues that what happened inside the elevator was not pleasant, but, in the greatest case of “Pics or it didn’t happen” in the history of the universe, since no one had actually seen the punches land it was almost as if they hadn’t happened at all. We saw Janay walk onto the elevator on her own and minutes later saw her being dragged like a sack of laundry out of the same elevator. The NFL essentially peek-a-booed us all into thinking that when those elevator doors closed the Rices ceased to exist until the doors opened again and Ray pulled his fiancee out into that lobby.

Commissioner Roger Goodell suspended Ray Rice for two games this season based on that video and on interviews he and others conducted with Ray and Janay Rice. The NFL claims that they consulted with New Jersey local and state authorities who were investigating the incident based on its criminal nature and determined that Ray Rice missing 1/8th of the NFL season was punishment enough for his actions that night in February. The NFL said that it had never been given access to the video from inside the elevator, despite several lauded NFL reporters saying otherwise, and we were expected to believe them. After all, why would they lie? Wouldn’t it be in their best interests, the team and the league, to have someone who committed such an unforgivable act out of sight? For a commissioner who hands down severe penalties for marijuana use and DUI offenses wouldn’t it make sense that, just one year removed from an active player committing a murder/suicide that claimed the life of the mother of his child, the commissioner would take a heavy stand on violence against women? After public outcry on the leniency of his punishment of Ray Rice Roger Goodell admitted that the NFL had made a mistake and he revealed new minimum punishments for domestic violence offenses. Under the new policy any league employee found to have committed an act of assault, battery, domestic violence, or sexual assault would be suspended for six games without pay for a first offense and for an entire year for a second. The employee could then file an appeal to be reinstated after that year but reinstatement was not a guarantee. On one hand this seems like a fair reaction to a mishandling of a delicate situation. Six games is more than a third of the season, it takes money out of the offender’s pocket, and it escalates should the behavior not be corrected. Yes, on the surface it’s a good policy to have on the books, but it raises an obvious question: Why wasn’t it on the books already?

As I noted before, just over a year ago Kansas City Chiefs linebacker Jovan Belcher murdered his girlfriend, and the mother of his child, Kasandra Perkins in her home before driving to the Chiefs’ facility at Arrowhead stadium and committing suicide in the parking lot in the presence of members of his coaching staff. Another former NFL player, Rae Carruth was a Wide Receiver for the Carolina Panthers and is currently serving a 24 year prison sentence for conspiracy to commit murder after he hired someone to kill the mother of his unborn child. Cherica Adams died because of Rae Carruth, and their son lives in spite of his efforts to murder them both. You see, Ray Rice isn’t the first NFL player to commit an act of violence against a female, hell, he’s not even the most recent. Just two weeks ago San Francisco defensive end Ray McDonald was arrested for an incident involving his pregnant girlfriend. The NFL has had issues with domestic violence for years and never bothered to put a policy in place to punish those that inflict harm on others until it became a matter of public opinion.

“Yeah, Yeah, I know all that,” you’re thinking to yourself, “you said you were going to come at this from a different angle!” Well here it goes:

There is another organization taxed with managing organized sports that has had its share of ups and downs when dealing out punishments; of course I’m talking about the NCAA. It’s reasonable to assume though that due to the sheer number of entities which exist under the umbrella of the NCAA that their job is just a bit harder than that of the NFL. The NCAA has to police multiple sports and hundreds of thousands of student-athletes at over 1200 institutions so mistakes are sure to be made, but unlike the NFL the NCAA puts part of the onus of compliance on the institutions themselves which brings me to my point: The NFL, in the case of domestic violence by its employees, has shown a severe lack of Institutional Control as it is defined by the NCAA, and those responsible for that lack of control should be punished accordingly. What I’m saying is, that if Roger Goodell’s NFL was a university under the purview of the NCAA there would be a very convincing argument  to be made that it deserves the “Death Penalty”.

I have already made it quite clear that the NFL had absolutely no policy in place to either deter OR properly discover incidents of domestic violence by its players or other employees, and even if it had a policy in place for punishment it had become clear in the last 48 hours that the NFL’s investigation of the incident involving the Rices was lacking in one of two ways. They either did not do their due diligence in pursuing a copy of the video from inside the elevator (A video they claim to have been denied by law enforcement but that was somehow acquired by a third party media outlet and released on the internet) or they had a copy of the video, as was reported by the Associated Press, and disregarded the severity of what the video portrays.

Roger Goodell has claimed that if anyone at the NFL office had access to the video in question that he was not made aware of it. He is claiming ignorance of the content of the video and saying that he didn’t view it until TMZ released it in the early hours of September 8th. He is either lying to cover up the fact that he saw the video and didn’t find it completely offensive or he is lying to cover up that no one in the NFL, one of the most powerful entities in this country, could gain access to a video that a glorified tabloid managed to get their hands on. If that doesn’t smack of a lack of institutional control I don’t know what does.

The NFL owners owe it to their fans, to their players, and to the wives and girlfriends of their employees to give Roger Goodell and the people involved in the Ray Rice investigation the SMU treatment. Shut them down for good. Make it so they never recover. The NFL is on the precipice of something it never anticipated. If Goodell is allowed to continue to be the face of the league then the NFL will become a laughing-stock. They should cut ties while there’s still time to save face, because right now they have a commissioner that thinks touchdown celebrations and smoking a joint in the offseason warrant more punishment than physically assaulting someone who can’t defend themselves, and that means that the system is broken.

The Original 14 Football Teams – Where Are...

I’m Not An Astros Cynic Anymore

Hoston vs Dallas – This Should Be Good!