New Heads on the Block

What every pilgrim should know

So you’re new to Houston. Big deal. So was everyone here, at one time or another. Just as we put a historical plaque on any building that gets a second coat of paint, anyone who has been in town since the last smog alert is considered an old-timer. But you want to blend in, so here are a few things to know, to avoid and to take on. This way, others won’t think you just fell off the oil tanker.

That road in west Houston is pronounced “san full-LEAP-eh,” not “san FILL-a-pee” or “san fill-uh-PAY.” We have a ROW-dee-oh, not a row-DAY-oh like that fancy-schmancy street in Beverly Hills. When entering a cantina, do not say, “Draw!” Also avoid using such terms as Cougar High, Dallas Cowboys (unless in a pejorative way) and Bud Adams. As a bit of background on this last item, the late Bud Adams owned the Houston Oilers and pulled off the impossible: He made football unpopular in Texas. Adams had a long-running row with Houston Post sports writer Jack Gallagher. They once got into a fistfight at the Shamrock bar. Later one colleague told Gallagher, “Bud Adams is his own worst enemy.” Gallagher replied, “Not as long as I’m alive.” Just trying to bring you up to speed on what happened here before you arrived.

Houston has several nicknames and some really dumb slogans which never caught on. The Bayou City is the most often used. Space City was a good handle until NASA gave away several spacecraft. Los Angeles got one. So did that hub of space flight, New York City. Houston didn’t. Later we got a cheap mockup made by Mattel or Lego. Another slogan, in an effort to go with our weaknesses, we coined Houston’s Hot. We got burned. Way back in our history, we used Where 23 Railroads Meet The Sea. That event must have made a huge splash, so to speak. We’ve tried Expect the Unexpected (which everyone expected). If you can think of a good city slogan for us, you can stay.

You may be wondering who are all these people with funny accents. Well, if you came from, say Boston, you would talk funny, too. Texans break any one-syllable word into two, the second beginning with y: Come over HEAR-yer, CA-yut, MAY-yun. One out every four of us is foreign born. Not just from one of the other 49 states. Foreign born. Houston has been called the most ethnically diverse city in America, if not in the world. Any place that has a lesbian mayor and a black police chief, where both Sheila Jackson Lee and Ted Cruz call home, has got to be diverse. Fortunately, we all get along, if you don’t count Aggies and Longhorns. And still newcomers arrive. From July 1, 2013, to one year later, Houston increased its population—due to both immigrants and sex—by 334,202. For Harris County, the new arrivals totaled 82,890. That’s 227 newcomers a day every single day. 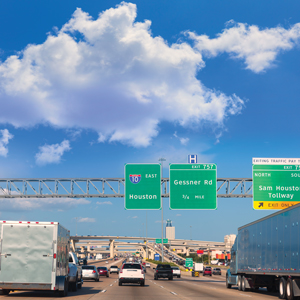 Now a word about Houston traffic. There is not much of it except during rush hour, which lasts from 6 a.m. to noon and noon to 8 p.m. If you are the average motorist, you drive 28.81 miles a day, which can, indeed, take a day. At last count there were 4,746,244 vehicles on our roads in this county, all trying to get a parking place at CityCentre. Most Houston drivers are armed and that includes those driving vehicles with training wheels. The term “riding shotgun” is not just a term. But do not be intimidated. Remember, warning shots are for wimps. Do not challenge those vehicles with notches on their front bumper, have the word “police” on the side, whose hood ornament is crosshairs or any vehicle with a tail-gunner. The city briefly had video cameras at major intersections to take photos of drivers running red lights and slamming into other vehicles, wounding or killing their fellow Houstonians. Fortunately, we voted to take the cameras down (and spend millions of tax dollars getting out of the contract). “T-boning” is not just on the menu. As for our mass-transit system, it hasn’t worked well since the mule died.

Austin has its under-the-bridge bats. Dallas has its Big Tex, and Houston has its buffalo. Gather along—where else?—Buffalo Bayou each dusk, and watch the running of the bison. On Sunday afternoons, you can place your bets on them at Buffalo Speedway. That’s where A.J. Foyt got his start. We have the world’s largest medical center. For a town dubbed the nation’s fattest city and smog capital of America, we need it. Houstonians love sports, but since most fans are from somewhere else, at any college or pro sporting event, it is often hard to determine which is the home team. We like to say: “At Minute Maid Park you are never more than half an inning away from Major League Baseball.”

We have 81 radio stations in the Houston area, some of which are in English. We have a public radio station that is so exclusive no one can hear it. Then there is KTRH, whose listeners have trouble dialing in since they tend to drag their knuckles. We have three daily newspapers in Houston; two of them are in Chinese. The other is the Houston Chronicle, which is based in New York City and cares not a very profitable fig about putting out a quality newspaper in some town down in Texas. It’s the same with TV. Our network stations are owned by out-of-state corporations which won’t spend any money. So all the local TV news programs show only murders, apartment fires, muggings and more murders. If you just arrived here, please unpack. We also have house fires. 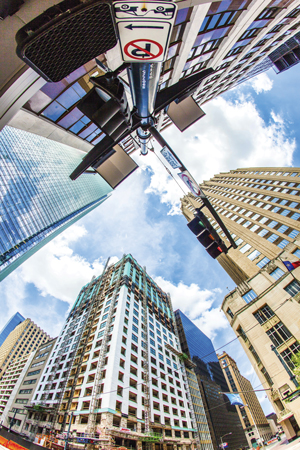 HUMILITY ABOUT OUR HUMIDITY

Here are a few items of knowledge for you newcomers:

• Telephone Road is not an unlisted number. River Oaks has no river. Chimney Rock is not a dance. Houston Heights is really not very high. Indeed, it’s hard to get a drink there.

• Fracking is good. Zoning is bad. So backyard fracking is acceptable, if not desirable.

• Matching mud flaps on your pickup truck is considered de rigueur. Saying “de rigueur” in most ice houses on Dowling Street can be harmful to your health.

• Students attend Rice for athletics and UH for academics.

• Yes, you can drive northeast on the Southwest Freeway.

• No, Miss Ima Hogg did not have a sister named Ura.

Visitors to Houston often comment about our weather, especially the humidity. Dermatologists say humidity is good for our skin, so we have nine giant humidifiers around town to keep our air moist. It rains here, but only on alternating days. Our summers can be hot, but not if you turn your AC down to 60 and never leave your house. We have roaches, but their size is often exaggerated by city boosters. I, personally, have never seen a cockroach larger than a shoebox. Okay, a boot box. Geographically, within the city limits of Houston’s 655 square miles, you could put New York City, Washington D.C., Boston, San Francisco, Seattle, Minneapolis and Miami. Might as well. Their inhabitants are already here.

Coming from elsewhere, as thousands of you have done, we welcome your arrival. We understand your bit of nostalgia at leaving Newark and Detroit, and we are patient, up to a point, with your NYU bumper stickers and the USC flags on your lawn poles, but by your own choice, you are in Texas now. Here, we name schools and counties after Lee and Jackson, Crockett, Zavala and Navarro. Your school children recite both the U.S. and the Texas Pledge of Allegiance every day. Deal with it or there is a U-Haul near you.

Despite what your job recruiter told you, Houston did not begin with your arrival. This is a city which can actually chart the very day it was born: August 30, 1836, when the Allen brothers ran an advertisement in the Telegraph and Texas Register for the “Town of Houston.” “There is no place in Texas more healthy, having an abundance of excellent spring water, and enjoying the sea breeze in all its freshness,” thus setting a Houston tradition we hold on to this day: Our developers lie. We have on our doorstep the San Jacinto Battlefield, where the Texians won their independence from Mexico but not from bandits, angry Indians who claim they got here first, drought, floods and the rare hurricane. It is easy to see why our side won at San Jacinto. The Texians had lookouts in that tall monument in the middle of the fight and a huge battleship just off shore.

Be careful when buying a house here. If the realtor says, “It’s a split-level,” check the foundation. A “fixer-upper” is a down-and-outer. A “teardown” means bring a match. Avoid buying any house that has a line drawn in the den at six feet labeled, “high-water mark,” or has the chalk outline of a body in the kitchen. We have some beautiful neighborhoods here, so avoid any that have a moat, guard towers or such names as Toxic Tundra, Cotton Mouth Meadows or Hurricane Alley. Incidentally, the only zoning we have here is the ozone.

Politically, voters in the City of Houston tend to vote Democrat. The county goes Republican. Either way, we send our least talented to Austin and Washington, basically just to get them out of town. A word of caution: Don’t bring up politics around members of the Democratic Party, the Republican Party, a cocktail party and especially around the Tea Party who are easy to spot: They all wear flak jackets.

You won’t be here long until you hear about the fate of our Official City Eyesore, the Astrodome. It’s been empty and deteriorating since the Astros and the Oilers had winning seasons. Suggestions on what to do with the structure have included using it for an indoor drive-in movie lot, a shopping mall and hotel, a space museum (we already have one but two are better), or that monstrous structure should be used to hold Lt. Gov. Dan Patrick’s ego. One of the silliest ideas was to turn the Astrodome into a baseball stadium, easily converted for football. We had a vote to decide its fate and the demolish-the-Dome side won handily, but, this being a democracy, Harris County Judge Ed Emmett ruled that we keep it. So, the taxpayers just spent a small fortune to give the outside a clean-and-paint job.

Before the Dome was built, the Astros played in Colt Stadium. What happened to it? The facility became an open-air warehouse for junk from AstroWorld. In 1973, it was broken down and sold to a Minor League team in Torreon, Mexico, for $100,000. The stadium was later moved to Tampico, where it still stands, as part of a public playground. Some Houstonians say the Astros should have followed the field of beams.

So welcome to Houston, newcomer. For all our faults, you could be back in Detroit.

TAKE IT ON THE LAMB

Q: What?s the Difference Between Houston and Hell?

PEOPLE WHO LIVE IN GLASS BOXES

THE YEAR OF OUR DISCONTENT

SHED A TEAR FOR THE YEAR

TEXAS ON THE FAST TRACK