Guitars, cadillacs and hillbilly music are just the tip of the iceberg in Music City.

Nashville, Tennessee, is a thriving business and entertainment mecca. Home to many giant health-care headquarters, their largest industry, Nashville also excels in finance, publishing, insurance and tourism. Then there’s the music thing. You’ll find musicians playing and trying to make it big, at all hours, in honkytonks throughout the city; you can have live music with breakfast, lunch, dinner and your late night/early morning snack. Music Row, the Wall Street of country music, boasts flashy offices for those who run the money side of the business, and people from the world over flock here to enjoy the mayhem. To keep up with demand, Nashville is building new hotels and just completed a state of the art, 1.2 million–square-foot convention center. 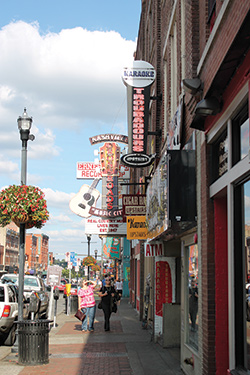 SEEING THE SIGHTS
Founded in 1779, Nashville has a lot of historic tourism. President Andrew Jackson, Old Hickory, lived here until his death in 1845. His adopted son poorly ran the seventh U.S. president’s plantation, Hermitage, and the property was rescued by the Ladies’ Hermitage Association before it was parceled out and its contents were sold. Much of the estate is original, including wallpaper, furniture and out buildings. The President rests next to his wife in the garden.

But the “Queen of Tennessee Plantations” is Belle Meade. Breeding and training thoroughbred racehorses led to big success for the Harding family. Virtually all of today’s Kentucky Derby winners can be linked back to Belle Meade’s breeding program, even though it ceased operation in 1904. During its hay day, presidents, generals and wealthy landowners could be found at the lavish parties thrown at Belle Meade.

The arts have been a big part of Nashville from early on. In 1897, the city built a full-size replica of Greece’s Parthenon to house art displays during the Centennial Exposition, a world’s fair. The Parthenon still stands as the art museum and a 42-foot statue of Athena, sculpted by Alan Lequire, towers among the columns, just as she did in Greece. Alan Lequire Gallery, which features more of his work, is nearby.

The Frist Center for the Visual Arts is a 24,000-square-foot restored U.S. Post Office. Rembrandts hang from the walls, and tour guides are entertaining and know their stuff. Designed for breaking down sound waves and maximizing the listening pleasure of classical music, the Schermerhorn Symphony Center is home to the Nashville Symphony. Or for a more casual arts experience, the Fifth Avenue Arts District stays open late once a month for the First Saturday Gallery Crawl.

The Country Music Hall of Fame is an impressive 40,000-square-foot museum now, and will be twice as big in the next few months. Guitars, cowboy suits and gold records mix with stories, music and video of country greats. But The Johnny Cash Museum is the newest attraction in town. We met his brother, sister and niece while we were there.

Nashville’s Visitor Center is ready to help plan your trip. They can arrange visits to local attractions, help book guided tours on Grayline Trollies and recommend family favorites, like their world-class zoo. 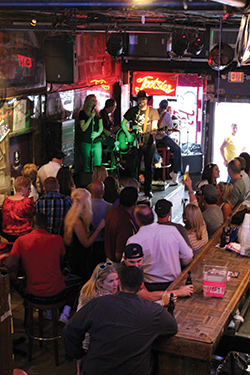 THE SOUNDS
The Honkytonks along Broadway are almost always rocking. Institutions like Tootsie’s Orchid Lounge and Legends Corner are some of the many little hole-in-the-wall joints that look like they haven’t been renovated since the 1800s. Yet, people pack in for cold beer and live music, without cover charges. The boisterous crowds see more stars in the audience than on stage; those standing on the hardwood are playing for tips—and praying for that big break.

Other venues encourage cheering after songs are played. The music reigns supreme at the Bluebird Café, where they feature songwriters—the guys who dream up the hits. Singer/songwriters are the main attractions at the Listening Room Café; audiences are respectfully quiet while musicians work. Up-and-coming acts can be heard at Douglas Corner, The Station Inn and countless other halls.

Then there are places for guys who’ve actually made it. Kix Brooks, of Brooks and Dunn fame, plays during the harvest at his own winery, Arrington Vineyards. You can go as big as LP Field, where the Tennessee Titans play, and Bridgestone Arena, home of the Nashville Predators hockey team. But no venue is more cherished than Ryman Auditorium, the “Mother Church of Country Music.” Built in 1892 as a church, the building is renowned for its acoustics. It was home of the Grand Ole Opry for many years and stars from Patsy Cline to Elvis Presley graced the stage. If you look at upcoming events, you’ll find Pat Benatar, Bryan Adams, Vince Gill, Boz Scaggs, Dwight Yokum, Gregg Allman and the Black Crowes waiting to revel in the wonder of this venue. Most concerts sell out weeks in advance.

THE FOOD SCENE
Expect lots of barbecued pork; there is some version on virtually every menu. Music City Flats turns out flat bread pizzas. (You have to try the Elvis, with peanut butter, bananas and chocolate.) The Cabana serves southern favorites, including fried alligator, bison sliders and sweet tea smoked chicken. Arpeggio, in the Schermerhorn Symphony Center, starts their meals off with bread and red wine–reduction butter, and it just gets better from there.

The Southern Steak & Oyster Bar is a trendy, sophisticated bar and grill. It’s the gathering spot before Titan’s games; big, high-stacked burgers, interesting brunch, rocking seafood gumbo and fresh oysters are served with live music playing. The Capitol Grill grows its own herbs and veggies, raises the cattle it serves and dishes up the most tender filet known to man. Residing in a beautiful, 100-plus-year-old hotel, the ambiance is incredible.

GET COMFORTABLE
Experience history, luxury and convenience at The Hermitage Hotel. A Forbes five-star establishment, the 100-year-old hotel has the finest ambiance and service, and its location makes it walking distance to most downtown attractions.

A Tale of Two Cities

Must Do: South Beach

ANA Airline’s Lounge takes you away