Much Ado About Houston

Summer in Houston isn’t complete without a little theater. And what could be better than the “merry war” between Benedict and Beatrice in Much Ado About Nothing, or the tragic underdog tale in Henry V, to take the edge off those steamy August nights? 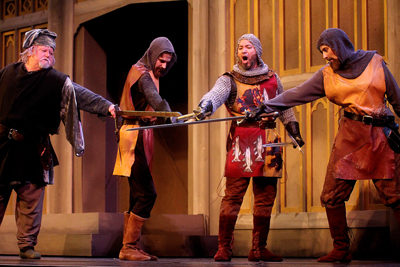 Beginning on July 29, the Houston Shakespeare Festival will alternate performances of Much Ado About Nothing and Henry V over the course of two weeks, once again captivating Bayou City theatergoers at Hermann Park’s Miller Outdoor Theatre. Since 1975, audiences from all over the city have enjoyed the event, watching Shakespeare under the stars for free every summer. Funding from the University of Houston, as well as several other foundations and individuals, has allowed the HSF to continue and grow, even providing an opportunity for emerging actors, designers, directors and stage managers from the HSF Conservatory to practice their craft in a professional environment.

For ticket and pricing information:
www.milleroutdoortheatre.com

Get more stories like this in our Summer issue, available on newsstands now!

Food Network Star, At Your Service

Matter of Food, Round 34

HOUSTON RACES FOR THE CURE ON OCTOBER 5