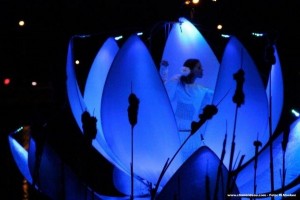 Discovery Green welcomes the return of MARAVILLOSO! A contemporary circus and dance event featuring talent from all over the world and from Houston. The two-day event returns as a Water Festival on June 5-6, 2015 with a graceful performance on Kinder Lake by Belgium’s and Netherlands’ artistic company Chanson d’Eau.

Original music and art works by Chanson d’Eau in their first US appearance, the performance features floating, glowing “flowers” that open to reveal graceful dancers on Kinder Lake. The festival will also include a new commissioned dance performance, in celebration of water, byKaren Stokes Dance.

Karen Stokes Dance is a non-profit dance company that has been producing original dance-theater in Houston since 1999.  During this time, KSD has performed in New York City, Toronto, Philadelphia, Cleveland, Dallas, Kaarlstad (Sweden), and in Houston, Texas.  In 2014, Karen Stokes was named number one choreographer by the Houston Press in their Top Ten Houston Choreographers list. In 2013, Houston Press awarded Karen Stokes with a Masterminds Award, the first contemporary dance company in Houston to receive this recognition for innovation in the arts.

Check back soon for performance times.

Quick Escape: Get Out of the House Already

TOO GOOD TO PASS UP

Much Ado About Houston