Kick Off On the Green

The National MS Society is hosting a Kick-off Party to celebrate the opening of registration for the 2012 BP MS 150! Bring the whole family out to learn more about riding or volunteering in the BP MS 150! 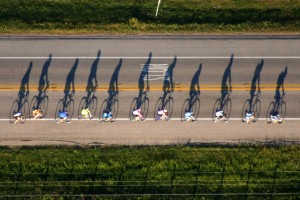 WHO & WHAT
To kick off the 2012 BP MS 150, the National Multiple Sclerosis Society is hosting a fun-filled “Kick Off On the Green” celebration on Thursday, Oct. 13 at Discovery Green to thank the thousands of Houston-area supporters who have helped make the ride the largest and most successful fundraising ride in the country for the Society. Now in its 28th year, the BP MS 150 ride, set for April 21-22, 2012, aims to raise more than $17 million in 2012 to fund cutting-edge research and programs for the estimated 56,000 Texans impacted by MS.

Nearly 13,000 cyclists took part in the two-day, 180-mile journey in 2011, and organizers of the ride expect another substantial turnout in 2012. General registration for this year’s ride begins online at www.ms150.org on Oct. 12, and those who attend the kick off will have the opportunity to win a registration package prize that will include a free registration and a night’s stay at a hotel in LaGrange on Saturday, April 21.

The “Kick Off On the Green” celebration will include activities for both ‘green’ and seasoned riders, including a Bike University, a rider orientation for new riders to learn everything about the ride and for veterans of ride to refresh must-do’s to prepare for the April 21-22, 2012 event. Additionally, attendees can enjoy a free concert in the park that evening as part of Discovery Green’s concert series.

The person to contact for the event is Brenda Buchanan, Brenda.buchanan@nmss.org or 713-394-2933.

Get in the Zone at the Museum Experience:...