Southwest Airlines has brought international travel back to Houston Hobby Airport after a 45-year hiatus. Southwest has been flying out of Hobby since 1971, when they famously flew the “Texas Triangle”—San Antonio, Dallas, Houston. In 2012, the City of Houston approved Southwest’s proposal to expand Hobby and bring international travel back to Houston’s in-town airport. The airline made a multimillion-dollar investment in a new international terminal. According to the Houston Airport System, this expansion brings 1.6 million passengers to Hobby Airport annually. More importantly, Houstonians can easily plan Mexican/Caribbean vacations to new departure cities, including Cabo San Lucas, Puerto Vallarta, Mexico City, Liberia, San Jose, Belize City, Cancun and Montego Bay. 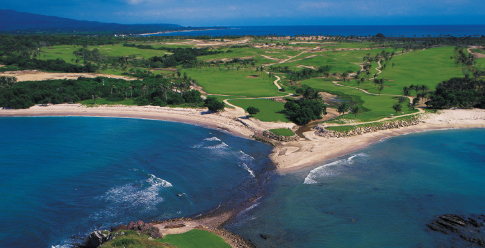 This past winter, we hopped a flight to the paradise destination of Puerto Vallarta, arriving at the Four Season’s Punta Mita just in time for our 2:30 p.m. tee time on the famous Pacifico Course. This Jack Nicklaus–designed golf course has eight seaside holes bordering the Pacific Ocean or Banderas Bay. The very memorable Hole 3B is called “the Tail of the Whale”; depending upon the tide, you can either ride to the hole in an amphibious vehicle, or miss the hole altogether due to high tide. It’s the world’s only natural island green—and it’s spectacular. The hot tropical sun beat down on us the last couple of holes, making our respite to the spa all the more welcome.

Just steps from our suite, the relaxation area at the Four Seasons Apuane Spa is inviting with individual seats separated by hanging crystals and beads. Apuane, Spanish for “healing waters,” is an oasis of serenity in scenic Mexico. We opted for the Punta Mita massage, an overall rubdown utilizing tequila, indigenous sage oil and traditional Mexican healing techniques.

Read the rest of this article in the 2016 Spring H Texas issue, available soon on newsstands and digitally.

The Woodlands Resort Houston’s home away from home

St. Croix Jet away to the Virgin Islands'...

Destination Cabo: The Resort at Pedregal