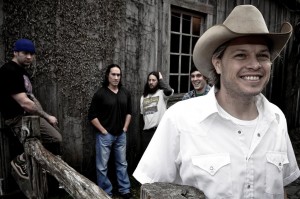 Texas Monthly says “‘Rancho Alto’ features simple but evocative storytelling and an elevated sense of songcraft…there might be hope for country music yet.” Boland is a country purist whose music has much more in common with Waylon, Merle, Willie, and Jamey Johnson than what is heard on the airwaves these days. He clings onto the notion that the fundamental values of the genre are soulful, blue-collar, defiant, truthful, and real.

Formed in 1998, Jason Boland & The Stragglers built a name for themselves through five studio albums, two live albums and most notably, their amazing sold out live shows. To date they have sold over 500,000 albums independently. Their 2008 release, Comal County Blue was one of 2008’s most successful independent country releases, debuting at #2 on the Billboard National Heatseekers chart, #30 on Billboard Country Albums, #1 on iTunes country albums, as well as their first debut on the Billboard Top 200. Rancho Alto debuted on Billboard Country Albums at #26 and the single “Mary Ellen’s Greenhouse” is currently #1 on Texas Radio.

Jason Boland & The Stragglers are Boland (vocals/guitar), Roger Ray (steel/lead guitar & dobro), Jeremy Watkins (fiddle), Grant Tracy (bass), and Brad Rice (drums).   With one foot firmly in the past and the other in the present, Jason Boland & The Stragglers make country music for people who love real country music and for people who just love great music.

Cabaret For A Cure