Don’t let Lindsay McCormick’s appearance fool you. She might be small and blonde—and a woman—but the host of Super Bowl XLIX is a sports authority to be reckoned with.

“I grew up in a huge sports family,” explains the sportscaster, who also covered the most anticipated fight of the decade, Mayweather vs. Pacquiao. “My entire family is obsessed with sports. So for me it was like, either learn to love it, or hate your life.”

Getting ready for her career in broadcasting, a young McCormick practiced on her stuffed animals.

A native Houstonian, McCormick became involved in sports and cheerleading at an early age. Her grandfather was drafted to play football for the Washington Redskins, and both he and McCormick’s brother went on to work for NASCAR. McCormick attended Auburn University in Alabama, where she got involved with the campus news station. When the resident sports anchor went out of town one weekend, McCormick was asked to cover the Auburn football games. She immediately fell in love with it. “When he came back to town, I refused to let him have his job back,” McCormick admits with a laugh.

One weekend, McCormick was on the sidelines covering Auburn play LSU, and ESPN’s College Gameday was in town and saw her in action. “They offered me a job as an intern with ESPN SportsCenter, and that was how, at 20 years old, my career started.”

McCormick’s expertise isn’t limited to football, either: She’s covered basketball—she was the sideline reporter for the quarterfinals of ESPN’s The Basketball Tournament—as well as boxing, covering the Timothy Bradley vs. Jessie Vargas fight, among others. McCormick contends, “I’ve had my fair shake with just about every sport, except baseball.” However with the Astros’ World Series championship win, she hopes to add it to her repertoire.

Her resume is impressive: McCormick was the stage host for Super Bowl Sponsor SAP alongside Marshall Faulk in San Francisco and served as NBC’s Sunday Night Football Social Host; she’s hosted the 2012 NFL Draft for CBS Sports, The Fan on Comcast SportsNet and was a panel analyst for Rip City Live. She also appeared on ESPN.com’s Streak for the Cash and ESPN College Pick’em and MTVU’s The Dean’s List.

With McCormick’s success in a male-dominated industry, there’s no avoiding the question of how she, a woman, made it to where she is today. “When I started 10 years ago, there were only a handful of women reporting sports. Erin Andrews was just getting started, Suzy Kolber had been there for some time, Linda Cohn…these were all women I looked up to, and they paved the way for other women to come into the field.”

Even with the help of these trailblazers, McCormick concedes it wasn’t easy. “I would go into these interviews knowing I had a lot to prove. I was going up against all of these men, and I had to prove my sports knowledge. The first question I would get was, ‘Why would our audience believe you?’” McCormick chuckles at the memory. “In hindsight, it was a huge insult, but at the time I thought it was normal. I felt I had to work twice as hard to prove to an audience that I knew what I was talking about.”

The boxing world, she reveals, has even fewer female broadcasters. “I’m hoping I can help change that over time.”

Despite her jet-setting lifestyle, McCormick recently bought a home in Houston in her childhood neighborhood, where her parents still live. She was in H Town, in fact, during Hurricane Harvey. “I drove out to stay with my parents when it happened. Our entire neighborhood got flooded. We stayed up for two nights straight in parkas holding buckets, trying to keep the water from coming into our home.” 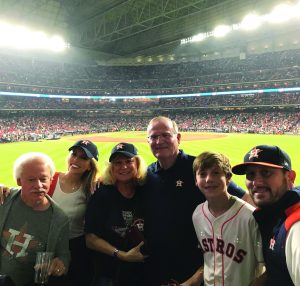 Hurricane Harvey was a tragedy, and one that many Houstonians are still dealing with. “It’s amazing to see how the city has bounced back,” McCormick says. “And I think the Astros have a lot to do with that. Their win helped the city shift their focus from a tragedy to something that binds us together. I love how sports have the ability to do that.”

McCormick can currently be seen in the romantic comedy The Bounce Back, available on Amazon Video and iTunes, playing a talk show host opposite Shemar Moore. She is also working on an augmented reality sports game for ePlay with fellow sports commentator and NBA champion and former Houston Rocket Robert Horry. “He was one of my favorite athletes growing up, and I’m so excited to work with him on this.”

As for whether she’ll be spending more time here in Houston? “I hope so. I go back and forth between here and California, but maybe I can finally learn some more about baseball by hanging out with the ‘Stros…” 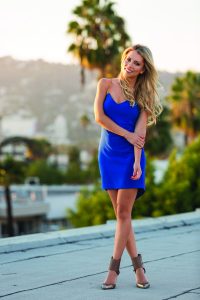 Get the Lindsay Look

Just how does she get that glow? Here are her best camera-ready secrets.

Number-one beauty must-have: Resurface by Shani Darden Retinol Reform. It’s magical. Every celebrity you’ve ever seen with flawless skin either visits Shani Darden as a facialist or uses her serum.

Nighttime miracle-worker: I use the Deesse Professional LED Facial at night. It’s this red-light therapy that helps to boost collagen production and heals the skin quickly.

Favorite ways to stay fit: I adore ballroom dancing as a form of exercise. I’ve been dancing since I was two years old, and started competing at the age of seven. Unfortunately, I threw my neck out doing a dip, but the injury introduced me to Pilates, which I’ve incorporated into my workouts. Pilates has been the best at helping me recover from my dance injuries while keeping me fit. It just transforms your body, and it’s perfect for someone like me, who is always on the go.

Stations of the Crosshairs

5 Fitness Stars’ Top Advice on How to...