Local TV’s nightly newscasts begin with “Good evening,” then proceed to tell you why it isn’t, someone once observed. Here in Houston, the 10 o’clock news is filled with death, destruction, convenience store stick-ups and car wrecks. Indeed, if you just arrived in town and turned on the TV, you probably wouldn’t unpack.

Houston needs a good, encompassing 10 o’clock TV news program because most people are still stuck in traffic during the 6 o’clock broadcast. We need information on what’s happening everywhere — Austin, Washington, Kabul — but we are forced to watch shallow, quick-and-splashy headlines (graphics are cheaper than journalists). 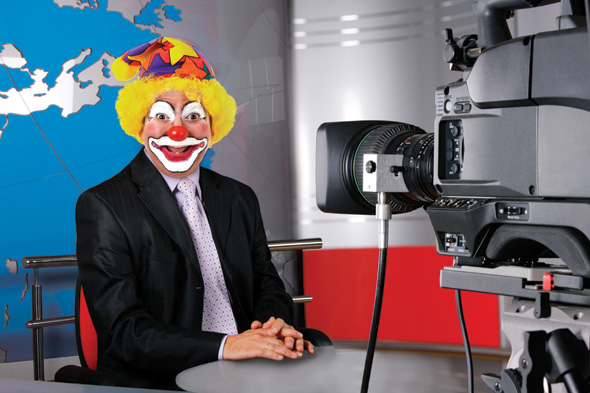 Our 10 o’clock news should reflect the interest of most Houstonians. Tonight, no kidding, the lead on KPRC is that River died. River is a dog that mysteriously went to doggie heaven at a PetSmart. When Peter Marzio died, the long-time and well-respected director of the Museum of Fine Arts, Houston, there wasn’t even a mention in the local news show I was watching. Marzio got a lengthy obit with a photo in The New York Times. But on TV news, we see only stories about Bulls Eye the Wonder Pigeon and, “Is there poison in your celery?” (The answer is no.) In fact, our news stations are so out of touch, you rarely see the lead story on the 10 pm news as the lead story in the next morning’s newspaper.

Actually, much of our local TV news comes directly from that morning’s Houston Chronicle and other community papers, which are occasionally credited. Years ago, I walked into KPRC, and news director Ray Miller – a legend in the biz – was neatly clipping out stories from the Chronicle and The Houston Post (I said that this was years ago) and handing them out to reporters with the order: “Follow up.”

This piggyback syndrome is even more prevalent on the national scene. If you read this morning’s New York Times you already know what’s going to be on the 5:30 network news. Don’t take my word for it. “It’s infuriating. If it wasn’t for The New York Times, network news would have to shut down.” — Andy Rooney, CBS writer and news producer for almost 50 years.

In an industry of turnovers, the Houston TV scene is different — we like familiar faces. Remember Ron Stone and Steve Smith? They were around for decades. Today, KPRC’s Bill Balleza (a former Marine sniper in Vietnam) has been on since 1980 and Dave Ward has been the face of KTRK, Channel 13, for 44 years. “As best as anyone can determine, I’ve been doing the same news show on the same station longer than anyone in the history of American television,” Ward once told me. The new kid on the screen is a nice looking guy with a deep voice; Greg Hurst has been on Channel 11 for 14 years. Hurst came to us via NYC, but like Balleza and Ward, is a native Texan. The three musketeers have competent co-anchors — Dominique Sachse, Gina Gaston and Len Cannon – but they are not the voice of the stations.

I bet they inwardly grimace as they report on twin snowflakes, but Houstonians should be proud to have good, professional journalists anchoring our nightly news. More specifically, I admire them because:

They don’t smack. Have you ever seen newscasters smack? Watch ABC’s Diane Sawyer; she’s the worst. When cameras focus back on her, after feature stories or commercial breaks, she begins with a loud smack. Jeffrey Brown on PBS is almost as bad. It’s a most annoying distraction. Thank goodness Houston’s professional anchormen spare us from “Smack Attacks” and “Smack Downs.”

A problem here is that on Channels 2 and 11, anchors often stand, Ward often doesn’t. Why do so many anchors stand while delivering the news? Can’t they afford a chair? Walter Cronkite never stood while giving us the inside skinny; neither did Edward R. Murrow. Today Brian Williams often stands as does Wolfe Blitzer; Diane Sawyer sits, but she smacks.

The men don’t wear ties. I suspect consultants told the anchors to stand, and believe the same consultants discourage wearing ties – except for sports segments. It’s clear many guests and anchors arrived on set wearing a coat, dress shirt and tie, and were told to go on stage tieless. Maybe the consultants think an open collar makes them appear relaxed. No, it makes them look like they were told to take off their ties.

Tonight, I’m watching the 10 o’clock local news, but I’m not getting the news. I am eavesdropping on a private conversation among beautiful people. I get annoyed when anchors giggle, laugh and toss witticisms back and forth. It’s happy talk, a time killer some consultant came up with that stuck around like Swine Flu. OK, a light look at light news is fine, but this forced, cheery give-and-take is a needless distraction from in-depth reporting and 30-second sound bites. Can you imagine Huntley and Brinkley tossing bon mots? It’s more than happy talk that irritates me.

If it bleeds, it leads. A Houston convenience store owner was shot by two gunmen; the crime is taped by the surveillance camera. As grainy video shows two alleged perpetrators entering the store our anchors say, “If you have any information as to the identity of these two, CrimeSlime4 is offering….” The two guys in baseball caps, putty noses and dark glasses could be my brothers as far as I can tell.

My biggest irritation is the lack of real news. Where are the probing inquiries into criminal doings at City Hall? The lengthy investigations of HISD’s corporal punishment policies (thumb screws and iron maidens). Does anyone cover stories which require time, talent and money? It seems mother corporations don’t like shelling out paychecks to reporters who take time to dig, interview and research. Maybe they’re worried reporters won’t come back with a story. Or, in today’s superficial environment, maybe they don’t.

Today’s many stations have freelancers who prowl the nitty-gritty streets at night while listening to fire and police monitors and react to reports of burning chicken coops, or perhaps crime scenes with dead bodies barricaded by yellow police tape in a cantina parking lot. Sometimes there are overturned 18-wheelers spewing toxic fumes. Or even better, burning chicken coops containing dead bodies set ablaze when an 18-wheeler overturned and spilled toxic fumes. The trifecta! Oh, and don’t forget meaningless aerial shots from the station’s TransJamCamBam helicopter showing little figures standing around cop cars.

We might better appreciate our local stations if we look at how they got here. There are several stations in town, but let’s stick to the majors. KPRC first broadcast on January 1, 1949, as KLEE-TV. The station was owned by hotelier W. Albert Lee. KLEE was the first television station in Houston and 12th in the entire nation. For four years, it was the only TV station in town.

In 1950, KLEE-TV was purchased by the Hobby family, owners of The Houston Post, who changed the call letters to match their radio station, KPRC (Kotton Port, Rail Center). KPRC hired Houston’s first female TV reporter. She seemed like, and was, a nice UT Pi Phi. She is now U.S. Senator Kay Bailey Hutchison. Channel 2 is owned by the Washington Post, and is the local NBC affiliate, but Comcast is trying to buy the network, so some changes may be coming.

KHOU, Channel 11, the local CBS affiliate, started out in 1953 in Galveston as KGUL (the GUL standing for either seagull or Gulf of Mexico, take your pick). The station went through a number of owners including actor Jimmy Stewart. In 1959, KGUL was moved to Houston and became KHOU (K-HOUston). Today it is owned by Belo of Dallas, whose main property is the Dallas Morning News. In 1998, it was the first station to sign on with a high-definition signal. Channel 11 was the launching pad for Dan Rather along with Linda Ellerbee, Jessica Savitch and sportscasters Jim Nantz and Ron Franklin (Ron was fired by ESPN in January).

KTRK, Channel 13, the ABC affiliate, is usually the highest rated local news show. Their consumer watchdog, the late Marvin Zindler, broke a story that became the basis for Best Little Whorehouse in Texas. Not many local news programs can say their work inspired Broadway and Hollywood. KTRK has also been through many owners including the Houston Chronicle, and for years it called itself “The Houston Chronicle Station.” KTRK was a one-letter variation of the paper’s radio station, KTRH. Today Channel 13 is owned by ABC/Disney which is based in Burbank, CA.

Channel 26 KRIV (owned by Rupert Murdoch’s Fox News), began in 1971 as KVRL, and since then has changed ownership and call letters numerous times. From 1975 to 1978 it was KDOG, and its slogan was, “KDOG, Where Every Dog Has His Day.” This station struck fear into Houston with its nightly panic attack, “City Under Siege.” Reeks of professional journalism, doesn’t it? Don’t unpack.

Channel 39, now called CW which is also KIAH, is owned by the (Chicago) Tribune Co., which is in bankruptcy. A while back, the parent company announced the creation of a new local news format in which there would be no on-air anchors and few live reports. The newscasts would rely on narration over a stream of clips, which would require fewer bodies to produce. Unfortunately, the guy who thought of this and was to implement it was fired after a scathing magazine article about his boorishness, so who knows what will happen? Both Channel 26 and 39 give Houston something it needs: their late news runs at 9 p.m. That’s a great help to those who have the dawn shift at the refinery.

Our local PBS station, KUHT, was the very first PBS station in the nation. The station threw out its first tote bag in 1953. And they say Texans ain’t got no couth. The station is owned by the UH System and is housed on the UH campus. My wife and I like to watch the PBS NewsHour each weeknight, especially the left-vs-right opinions of Shields and Brooks. Unlike their shouting, interrupting counterparts on Fox News, this duo gives out knowledgeable and calm opinions, usually on Fridays. Because we watch KUHT, we give during its weekly fund drive, sometimes anonymously since once you get on the station’s donors’ list, you get hit up constantly. KUHT spends more money trying to get more money from me than I give.

Currently, laziness and lack of money are contributing to shallow news coverage. The nation is in an economic decline with massive cutbacks, so it is ridiculous to think the vast wasteland should be any different, but some station owners never spent much in the first place. This brings us to ownership. Notice Houston’s major TV outlets are owned by absentee landlords. Think of these stations as giant vacuum cleaners sucking money from Houston to a pipeline ending elsewhere, just like the Chronicle’s profits go to the Hearst family members wherever they are, but not here.
We can watch about 500 TV channels via cable. If I wish to pay for them all, I would have a choice of nine HBO channels, another nine Showtime, plus channels dealing with food, golf, tennis and game shows, Penthouse, Playboy and Sexsee. There are 44 in Spanish (oops, make that 45 – KNWS just became KYAZ broadcasting Azteca America). Others speak Chinese, Russian, Vietnamese, East Indian, Arabic, French and/or Italian. Four more are “South Asian.” We do have a choice of what we watch. I am a news addict, so I choose news.

A FAILURE TO COMMUNICATE