THE DEALERSHIP – Oh, hi. I am just picking out what color Lamborghini I’m going to buy. You should do the same, because Big Bux are headed this way. And we deserve to get our share. The story, a scandal, really, is fairly well known. From 2006 to September 2015, nearly a decade, Volkswagen had a great way of selling more cars in the U.S. than Toyota, to become the world’s number one carmaker. Their aces in the hole were “clean diesel” vehicles. Fawning press reports stated: “About 580,000 such sedans, SUVs, and crossovers were sold in the U.S. under the company’s VW, Audi, and Porsche marques. With great fanfare, including Super Bowl commercials, the company flacked an environmentalist’s dream: high performance cars that managed to achieve excellent fuel economy and emissions so squeaky clean as to rival those of electric hybrids like the Toyota Prius.” 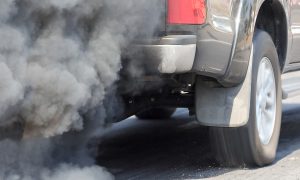 There was just one problem: It was a hoax, a con job. In a nutshell, VW altered its test cars to produce lower pollution and higher mileage than those actually sold on the market. The scam was discovered, VW executives – the plot was known to the highest levels – were hauled into court, and a fine was recently levelled: $2.7 billion. Texas gets about $30 million, enough to cover a pay raise for our legislators. No, the money is supposed to go to programs to improve our infrastructure with encouragement for more electric cars with more charging stations, that sort of thing. Gov. Greg Abbott chose the Texas Commission on Environmental Quality (TCEQ) as the lead agency responsible for the administration of funds. That’s the same toothless TCEQ that has cleaned up our air so that the American Lung Association’s 2018 scorecard gave all of the big Texas cities poor marks for ozone pollution.

That’s the idea: millions of dollars to clean up our air. Good luck. We should remember the Master Settlement Agreement, or MSA. That was the deal in 1998 in which the tobacco industry would pay out $246 billion over 25 years to treat tobacco-related health issues and to prevent young people from taking up the cancer sticks. Ah, but did anyone really think Big Tobacco would shell out all that money? The entire cost of the settlement is being paid – not by the tobacco companies, but by smokers through price increases.

Where did that tobacco money go? The settlement made no mention of how the states would spend it, so you will recall from previous discussions on this matter, Michigan spent 75 percent of its settlement funds on scholarships for high school students. New York allocated $250 million for debt reduction. While only spending $5 million on youth smoking prevention, Illinois dropped $22.1 million to improve state buildings. Two Nevada PBS stations received $2 million to develop high-definition TV capabilities in exchange for airing some anti-tobacco ads. Niagara County in upstate New York spent $700,000 in tobacco settlement funds for a sprinkler system at a public golf course. The county also spent $24 million for a county jail and office building. In Wrangell, Alaska, $3.5 million of the tobacco settlement money was used to renovate shipping docks. In Los Angeles, former Mayor Richard Riordan proposed using $100 million in tobacco money to defend cops who are accused of planting drugs and guns on suspects. He was turned down.

North Carolina spent $42 million of the settlement funds to market tobacco and modernize the tobacco curing process. North Carolina also gave $200,000 in tobacco money to the Carolina Horse Park, an equestrian center near Pinehurst, N.C. The center defended the grant, saying it will boost economic development. But local taxpayer groups thought the allocation was wasteful. The Centers for Disease Control and Prevention recommended that states should spend approximately $3.3 billion per year on tobacco prevention and education, but the states budgeted a little less than 2 percent of that money, or less than $500 million. That means that for every dollar the states got from the tobacco settlement, two cents was spent on preventive programs.

Texas got $17.3 billion, so how was it spent? I mean, have you seen any anti-smoking TV ads? I, haven’t. It reminds us of that little box you could check on your electric bill that would add one dollar – a single buck – to help cover the electric bills of poor souls who couldn’t pay for their a/c in the summer. The Legislature took those millions, and funneled them into the general treasury. Then there were the lawyers. The national tobacco settlement was and remains by far the largest money transfer in the history of plaintiff litigation, and attorney fees just kept mounting. In Texas, five lawyers took on the tobacco industry, which until then had won every single court battle, on a contingence fee — if they lost, they got zero. The Tobacco Five, as they were known, won and received $3.3 billion, another record.

Back to our impending fortune. Texas has an unexpected windfall of approximately $30 million from VW. The money is supposed to be spent to clean up the air, including something about reducing nitrogen oxides in the environment. I have no idea what a nitrogen oxide is, but we’ve got to figure neither does the clerk at the TCEQ who is handling the millions. So we start a company called Nitrogen Oxide of the United States, or NOXIOUS. Slogan: “We clean up stuff!” How about a car company manufacturing automobiles called the Eletrix? The car runs on gasoline, but what Austin bureaucrat is going to stick his head under the hood to see?

It would be interesting to find out, in a few years, exactly where that $30 million went, and if all that money actually made even a slight difference in Texas’ air pollution. For us, this is a can’t-miss gold mine. Make room in your garage for that Lamborghini. I understand it has low emissions and is very fuel efficient.

Ashby gets rich at ashby2@comcast.net

REALM OF THE COIN

So You Think You Know Houston?

Every Fire Has Its Place