Kareem Jackson is channeling his inner Tyson Beckford for a photo shoot at Discovery Green, when he calls out, “Modeling is hard. Harder than playing football.” Considering how easy he makes playing football look, this isn’t surprising in the least coming from the quiet, humble Jackson. 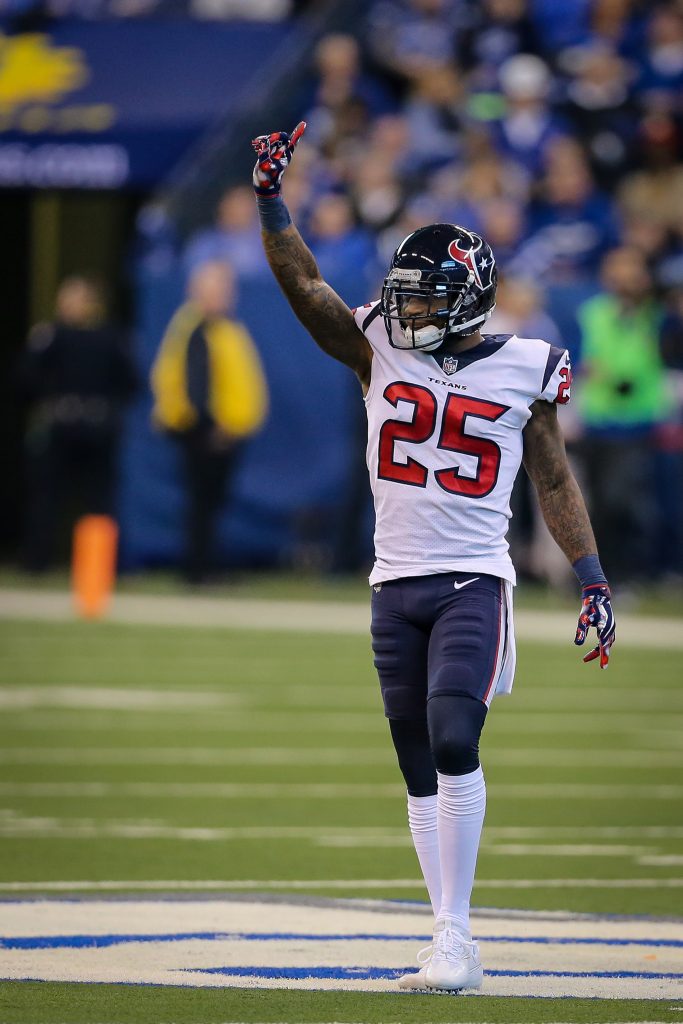 Jackson in action as the cornerback of the Houston Texans.

Jackson, 30, grew up in Macon, GA, and developed a passion for football in high school. He was recruited by the University of Alabama, where he played cornerback for the Crimson Tide. In 2010, Jackson was drafted by the Houston Texans, and he’s been here ever since, now in his ninth season. Lately things have been especially busy: He and his wife, Amber, recently closed on a house in Florida so his family could be close by during training. They’re also expecting their second child, a girl, in June. Their first, Kaylen, is two.

Despite having his hands full, Jackson stays game-ready between seasons with cardio. Lots and lots of it. Early on in the off-season, Jackson starts off by running a few miles on the treadmill. He progresses to sprint work, hills, and then to speed workouts. “I never want to have to get back into shape,” he says. “I want to stay in shape, even when I’m not playing football.” Admittedly, this can be difficult, especially considering his penchant for sweets. “I love fresh-baked chocolate chip cookies…and any kind of fruity candy, like Skittles, Sour Patch Kids…and Krispy Kreme doughnuts. Yeah, those things give me a hard time, for sure.”

Luckily, he enjoys the process of burning off those extra calories. “You gotta have fun with whatever you’re doing. Sure, you gotta put the work in, so you may as well have fun doing it.” 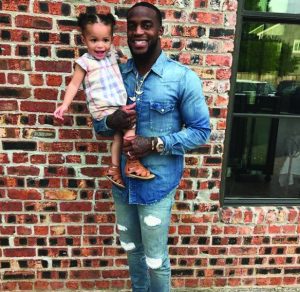 Jackson with his daughter.

Off the field, Jackson dabbles as an entrepreneur with his clothing line, Fly Guy (flyguyshop.com), which features high-end lounge and streetwear for men. The line, Jackson says, is for men “who like to make a statement with their wardrobe.”

Jackson also spends his leisure time enjoying everything Houston has to offer: He loves hanging courtside at Rockets games, which he does often, or going bowling with buddies. He’s also no stranger to the city’s restaurant scene (see “Kareem’s Favorite Houston Eateries” below).

He admits to being a homebody, however, and prefers spending time in his “man cave” with friends, his three dogs—an Argentine Dogo, a French bulldog and a Chihuahua—and above all, with his family. “My little girl is growing every day, learning new words every day,” beams Jackson. “I don’t want to miss that. My family is definitely my priority.” A quick scroll down his Instagram feed, teeming with photos of him, his wife and his daughter smiling from ear to ear, is proof enough.

Perhaps the second-biggest contribution of his time goes into his campaign against cancer, a cause very close to Jackson’s heart. “I started the Kareem Jackson Foundation a while back, but it’s really taken off recently,” he says. “My mom is a two-time breast cancer survivor and my sister is a leukemia survivor, so I guess you can imagine what my childhood household was like. I decided that once I was in a position where I could help people and families affected by cancer, I would jump at the opportunity.” 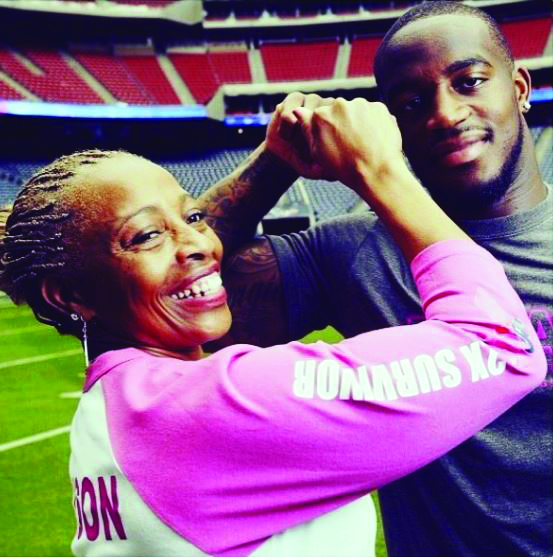 His mom inspired him to create the Kareem Jackson foundation to raise cancer awareness and provide resources for families battling the disease.

As Jackson’s brand grew, he was able to conceive his dream and the foundation took off. The foundation hosts a variety of fund-raisers each year, with the money raised going directly toward various programs that raise cancer awareness and provide educational, recreational and healthy-living initiatives for families affected by breast cancer and childhood cancer. Such programs include Christmas in July, which provides gifts to kids battling cancer and their siblings; the Pretty in Pink VIP Luncheon, which honors breast cancer fighters and survivors; and Texan for a Day, which provides families of children battling cancer with a free VIP day at the Houston Training Camp at Reliant Stadium. On May 22 Jackson and his teammates are teeing up at Topgolf Houston-Katy with a live and silent auction; the proceeds will go toward these initiatives. (For more information, visit kareemjackson.org.)

Jackson’s charity efforts don’t end there—the Texans cornerback is also active with the Candlelighters of Texas Children’s Hospital, a group that provides emotional, educational and practical support to families of children with cancer. “I do a lot of work with them every year, too,” Jackson says. “Anything to keep families from going through what we went through.”

Looking to the Future

In terms of his football career and the upcoming season, Jackson is optimistic. “The locker room has been pretty upbeat. We went through a lot last year, a lot of injuries, but at the end of the day, we all have the same goal. Getting our guys healthy again is definitely a priority. We’re putting last year behind us and looking forward to this year.” He smiles. “We just want to win.”

“Houston is home,” Jackson says definitively. “I love it here. It has so much to offer. This will definitely be home for me and my family when I’m done playing ball.”

As long as the modeling days are held to a minimum.

ANGEL FIRE RESORT IS SET TO OPEN THIS...

PULL UP THE GANGPLANK THE STREET