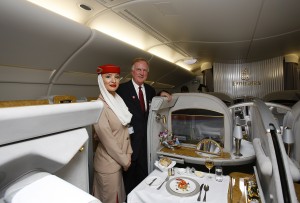 Emirates, a global connector of people, places and economies, landed its first A380 at Houston’s George Bush Intercontinental Airport, with the introduction of its flagship Airbus A380 aircraft to the route. Houston is Emirates’ fifth U.S. gateway serviced by an A380.

Emirates launched its Houston-Dubai service in 2007 and the route has generated strong and sustained passenger demand since its inception. The airline has transported over 1.2 million passengers between the two cities to date. The A380 up-gauge provides 137 more seats on every flight – a 38 percent increase in overall capacity and one which has been driven by consumer demand. In addition to increasing connectivity with Dubai – Emirates’ home, the up-gauge will enable more Houston-based travelers to access Emirates’ global network including 10 passenger destinations in India, 20 points in Africa and 16 in the Far East.
“Commencing A380 service to Houston will enable Emirates to grow alongside the city, which is experiencing strong economic development and the highest employment growth rate in the country,” said Hubert Frach, Emirates’ Divisional Senior Vice President, Commercial Operations West – Americas, Africa, Europe and Russian Federation. “The Houston Airport System and the University of Houston have calculated that the current contribution to the Houston economy of Emirates’ operations is $257 million. This increase in capacity will help support an even stronger contribution.”

Cargo is also an important contributor, and in the past 12 months Emirates SkyCargo has transported 10,878 US tons (9,868 metric tons) of cargo from Houston. Exports on the route include: Oil Field Equipment and Parts, Cell Phones, Drilling Mud, Air Conditioner Parts, Steel Pipes, Helicopter Blades and Chemicals.

“The City of Houston welcomes this upgrade in service from our partners at Emirates,” said Houston Mayor Annise Parker. “It’s important for the ‘Energy Capital of the World’ to enjoy a strong level of connectivity with Dubai, and the presence of this Texas-sized aircraft ensures that Houston is well positioned in that regard.”

“The arrival of this aircraft is a testament to the strength of Emirates’ route between Houston and Dubai,” said Houston Aviation Director Mario C. Diaz. “Travel between Houston and the Middle East has more than doubled within the past five years alone, and Emirates has placed itself in excellent position to capitalize on this dynamic area of growth.”

The Emirates A380 is a wide-bodied, double-decker aircraft seating 491 passengers, including 14 First Class Private Suites, 76 Business Class lie-flat beds and 401 spacious Economy Class seats. While aboard the 15-hour-and-40-minute flight from Houston to Dubai, Emirates passengers in all cabin classes will enjoy renowned service provided by a multilingual crew representing more than 130 nationalities, savor regionally inspired gourmet cuisine, stay connected via on-board Wi-Fi, and immerse themselves in the award-winning in-flight entertainment system – ice Digital Widescreen – that offers more than 1,800 channels of movies, TV programs, music and podcasts.

Emirates’ First and Business Class cabins have earned some of the most prestigious recognitions in the aviation industry for service quality and unique amenities – including Saveur Magazine’s Culinary Travel Award for Best In-Flight Dining: First Class & Business Class in 2013 and 2014. First Class passengers travel in Private Suites and can refresh in Emirates’ unique Shower Spas while in flight. First Class and Business Class passengers can also access the Emirates signature Onboard Lounge and socialize over fine wines, cocktails and hors d’oeuvres prepared by five-star chefs; travel to and from the airport via Emirates complimentary Chauffeur-drive; and relax in 37 exclusive airport lounges worldwide.

A NOTION OF IMMIGRANTS

The Culinary Wonderland of Calgary

Escape to Belize with Special Rates from Pelican...

Wine-ing Down at Tapatio Springs

The Ritz Carlton Club and Residences