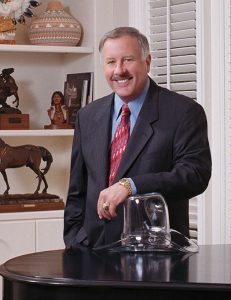 ED McMAHON is a native Houstonian who owns Ed McMahon Interests, which builds and develops residential and commercial properties as well as equine centers. He has been actively involved in the Houston community for more than 50 years. Having volunteered for The Houston Livestock Show and Rodeo for half a decade, he now serves on the show’s executive committee. Ed has helped raise millions of dollars for the Rodeo Scholarship Fund, which provides financial aid to students for college expenses. Additional charity work includes working with Citizens for Animal Protection and the Cystic Fibrosis Foundation, as well as serving as president of the Crohn’s and Colitis Foundation, for which he was awarded Board Member of the Decade. Ed has served as a director of the Western Art Museum in Kerrville, TX, and is an associate of the National Cowboy and Western Heritage Museum. He co-founded “Men of Distinction,” benefiting Texas Children’s Hospital, and is an honorary board member of the Baylor Research Advocates for Student Scientists. In 1986, Ed co-founded the “American Art Classic,” which has since donated auction funds in excess of 1 million dollars to the Houston Livestock Show and Rodeo and the Edna Gladney Center in Fort Worth. He also co-chaired the Western Heritage Sale, which raised funds for student art scholarships located at the Museum of Western Art in Kerrville.