Driskill Hotel history is preserved in shadow boxes displayed throughout the property. The boxes contain old photos, dried flowers, shaving paraphernalia, a stopwatch, postcards and much more, all of which depict life around our state capital in the 1800s. 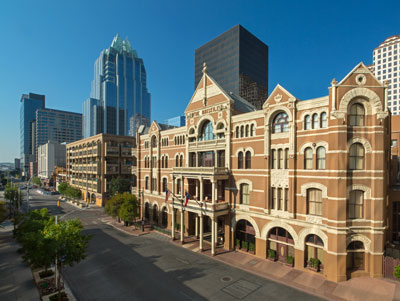 The exterior of the Driskill Hotel.

Welcome to Austin’s grand dame, standing tall and proud at the corner of Sixth and Brazos Street, with marble floors, stained-glass rotundas, beveled glass doors, intricate carvings on pillars and an original bank-vault door. When the hotel was built in 1886, there was an extraordinary view of the Texas state capital from the second-story lobby, but the city grew up around her, and office buildings rose up in the six blocks between the two properties. When the view was gone, there was no longer a need for the big windows; they were filled in, and the space is now a meeting room.

HISTORICAL SIGHTS
Touring the lobby is like taking a Texas history class. Colonel Jesse Driskill was a cattleman when he opened his pride and joy on December 20, 1886. On January 1, 1887, Governor Sul Ross held his inaugural ball in the ballroom. But sadly, a devastating drought stole Driskill’s fortune, and he was forced to close within a year of opening the hotel. His portrait hangs atop the marble staircase, and his cattle brands are replicated on the carpet in the bar. 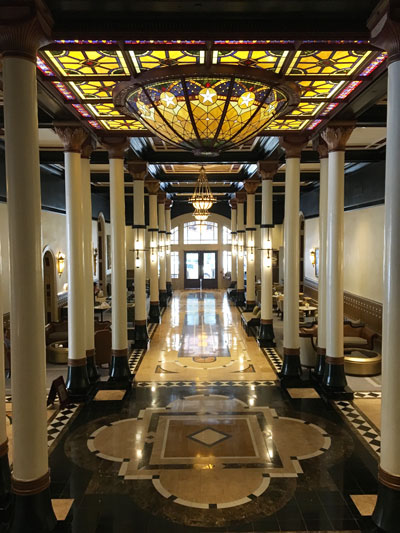 Walk the same lobby as LBJ.

President Lyndon and Lady Bird Johnson had their first date here. Later, Lady Bird broadcast her radio station from the first floor; KLBJ is still on the air today. The Driskill was a natural choice for Johnson’s campaign headquarters during his congressional races, and he watched election results from the presidential suite in 1964, as he became the most powerful man in the world.

CAPITAL CUISINE
The Driskill Grill, established in 1929, is legendary for incredible service and inventive cuisine. Recently, Executive Chef Troy Knapp and his team dug through the Austin History Center’s archives to “see where it takes us” as they revamped the menu. Expecting to find a lot of regional cuisine, he was surprised with an international menu proudly promoting imported items. Apparently, in 1929, diners weren’t interested in items they could get at home. 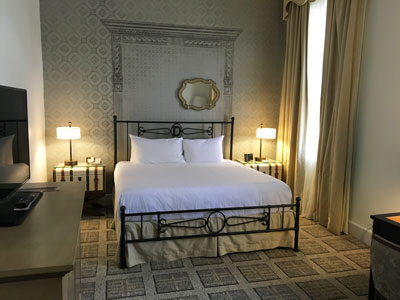 Guest rooms are a welcome mixture of old and new.

Today, the grill is nostalgic and timeless. The menu is seasonal and classic, offering regional American cuisine. The Foie Gras is a play on the old liver and onions. Texas beef is dry aged in house for 30 to 45 days. The Akaushi Rib Eye is served with seared foie gras, shaved black truffle and Bordelaise sauce. It simply melts off the plate and onto your palate. The chef de cuisine is heading up a research project to locate Colonel Driskill’s cattle yards. Wouldn’t it just be the finishing touch to eat beef raised on the same lands that financed the creation of this Austin landmark? We think so, too.

The property has recently undergone an $8.8 million renovation to its guest rooms, public spaces and restaurants. The renovations could not come at a better time, as 2016 marks the 130th anniversary of the hotel.

For more information on how to escape, visit www.driskillhotel.com.

Get more stories like this in our Summer issue, available on newsstands now!

The Magical Island of Fano

The Woodlands Resort Houston’s home away from home