Like you, I stay awake at night worrying about the Electoral College. It doesn’t have much of a football team, but it does choose our presidents, no matter which candidate the American voters prefer. As we all know, Hillary Clinton beat Donald Trump by 2.9 million votes, even counting Trump’s write-in ballots from Russia. Al Gore got 540,000 more votes than George W. “Hanging Chad” Bush. In each case, it was not the popular vote, but it was the Electoral College vote that counted.

And Texas may start counting, too, finally. Federal lawsuits filed in Texas and three other states are seeking to end the winner-take-all system that awards every electoral vote from that state to the winning presidential candidate. The lawsuits argue that the winner-take-all system violates voting rights by discarding ballots cast for losing candidates. This is a two-party argument: Democrat voters in the GOP strongholds of Texas and South Carolina, and Republicans in Democratic California and Massachusetts have no say in picking their president. So if you voted for Hillary in Texas, your vote didn’t count, thus the lawsuit. In Texas’ case, it wasn’t state officials who filed the suits. They are perfectly happy with the current system. Indeed, Texas Attorney General Ken Paxton will defend the state’s electoral-vote system, which was filed in San Antonio federal court in late February. Your tax dollars at work.

A bit of background: In 1787, the Founding Fathers drafted the U.S. Constitution, and stuck in the Electoral College (Article II, section 1.) as a compromise between election of the President by a vote in Congress and election of the President by a popular vote. Another version is they decided the average citizen wasn’t erudite enough to elect a president without a filtering process. Each state receives a number of electors equal to the number of its U.S. senators (two in each state) plus the number of its U.S. representatives, which varies according to the state’s population. In the 2016 presidential election, California had the most with 55 electoral votes; other less populated states, such as Vermont, had three. Texas had 38 votes, and the 2020 census should give us two or three more. 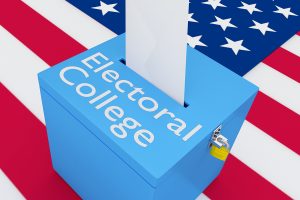 You just thought we choose our President on the first Tuesday after the first Monday in November. No, on the first Monday after the second Wednesday in December, (still with me?) the electors meet in their respective state capitals to officially cast their votes for President and Vice President. These votes are then sealed and sent to the president of the Senate, who on Jan. 6 opens and reads the votes before both houses of Congress. Who or what exactly is the Electoral College? It consists of 538 electors – Washington D.C. gets three. A majority of 270 votes is required to elect the President. The winner is sworn into office at high noon on Jan. 20 before the largest crowd ever gathered anywhere. Four presidents have been elected by the Electoral College after losing the popular vote. As we have seen, two of them won in recent years.

Forty-eight states have the winner-take-all system. Maine and Nebraska have a variation of “proportional representation” that can result in a split of their electors between the candidates, which seems a lot fairer than what we have now. As for Texans: “Everyone in Texas is being ignored, because Texas just doesn’t matter to the presidential election,” said Lawrence Lessig, a Harvard University law professor who was a leading organizer of the legal effort. Almost 3.88 million Texans voted for Hillary Clinton in 2016. Not a single vote counted. Most black and Latino voters, who make up more than 40 percent of the Texas electorate, have not had one electoral vote cast for their preferred candidate in the past four decades. (In the 1932 election, Franklin D. Roosevelt gathered all of Texas’ electoral votes with 88 percent of the popular vote. In 1992, George H.W. Bush did the same with only 40.5 percent in a three-way race against Democrat Bill Clinton and independent Ross Perot.)

Being a solidly red state means presidential candidates don’t bother to campaign in Texas, although they come here for money. Indeed, GOP candidates consider Texas their ATM. If we give a lot of money, maybe one of us will get appointed to a top position – like Secretary of State. The candidates spend their time and funds in battleground states like Michigan, Pennsylvania and Wisconsin where there are a lot of Electoral College votes, as I was telling President Hillary.

The only time any money came back to Texas was in 2008 when Hillary and Barack Obama were both seeking the Democratic nomination for President. The Texas campaign was tough and mystifying to outsiders. It’s hard for missionaries to grasp the difficulties of running a state-wide campaign here. We are expensive. Texas is separated into 20 media markets, the most of any state. Former Texas Land Commissioner Garry Mauro, who was state director for Hillary Clinton’s campaign in 2008, told The New York Times, “It’s like running a national campaign. There are no similarities between Amarillo and Brownsville and Beaumont and Texarkana and El Paso and Austin and Houston and Dallas. These are very separate demographic groups with very diverse interests.” The primary election led to the Texas Two-Step with voting, caucuses, and late-night confusion.

If Texas went to a proportional vote, like Maine and Nebraska, presidential candidates would be forced to come here to campaign, hoping to get a slice of our big-delegate pie. That means renting hotel ballrooms and suites, cars, cops, caterers, lots of ads on TV, radio and newspapers. More importantly, everyone’s vote would count. We would no longer be spectators in the sport of government. This would mean amending the Constitution, but if Americans can change the charter to prohibit alcohol and give 18-to 21-year- olds the right to vote (they still don’t), we can drop out of college. So I can get some sleep.

Ashby is electable at ashby2@comcast.net

Gather at the Green