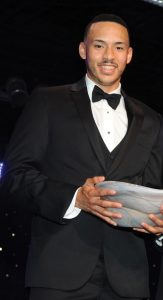 Astros shortstop CARLOS CORREA was the number-one overall pick in the 2012 amateur draft, arriving in the Majors in June 2015 at age 20. He immediately received the American League’s Rookie of the Year award. On July 5, 2015, Carlos became the first player since 1914 to record five games with a minimum of three hits and a home run in 25 plate appearances since his debut. By his 42nd game, he was leading the American League in home runs by shortstops. This game was also Carlos’ seventh with at least three hits, a record for rookies in this league. By hitting nine home runs during this time frame, he also became the first shortstop in a century to accomplish this feat in his first 42 games. By his 50th game, he had batted more home runs than any other shortstop in history, recording four more than the previous record-holder. On October 12, 2015, Carlos became the youngest shortstop to hit a home run in a playoff game. At season’s end, he was selected as the Sporting News AL Rookie of Year. At the 2015 Players Choice Awards, he received the AL Outstanding Rookie Award. On November 16, 2015, MLB and the Baseball Writers’ Association of America (BBWAA) recognized him as the AL Rookie of the Year. He became the first Astro to win a Rookie of the Year award since Jeff Bagwell in 1991.

Carlos began the 2016 season by becoming the youngest player in Astros history to hit a home run on Opening Day. It was also this past year that Carlos became involved with the Houston Children’s Charity’s “A Better Nights Sleep” program. It was his desire to ensure that every child on the wait-list—a total of 2,000—receive a new mattress, box spring, sheets, pillow and blanket. He also served as Honorary Chair of the HCC 2016 gala. Carlos has set a goal of making an even bigger difference in the lives of Houston’s children moving into 2017. He says that his partnership with HCC has been very meaningful not only to himself, but to his entire family.