by Dick Dace and Joel Hoopaugh

We arrived in Budapest at eight in the morning after an extremely bumpy and exhausting overnight train from Prague. We blamed the Soviet-era tracks, the heavy-footed brake man, and the Animal House rejects who partied next door. Our hotel was the sister property to our Vienna accommodation, The Kempinski Hotel Corvinus. Conveniently located in the city center and surrounded by

other high-end hotels, it is nestled between the Ritz-Carlton Budapest and two metro stops. There is nothing like staying at the Kempinski, where one is rejuvenated just by walking through its revolving door.

First stop of the day was Memento Park. We caught the 11 a.m. Memento Park Bus less than one block from our hotel, for a short 20 minute drive outside the city. Created in 1993, the park includes several of more than 1,000 communist-era statues that were an intricate part of the intimidation and propaganda campaign the Soviets used to control the Hungarian people from 1945 until 1989. In the center of every community was a statue showing a benevolent soviet soldier protecting a Hungarian peasant, or a three-story tall statue of Joseph Stalin looking down like a mythical God. 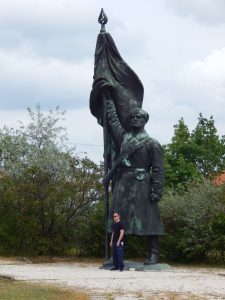 Other statues feature Lenin, Marx, and Engels. The statues made me depressed, sad, and angry. Apparently, most Hungarians agreed with me. In 1989, with the fall of the Soviet Empire, citizens toppled the soviet era statues all across the country, and many were melted down to create new works of art.

Hungary even used some of the communist statues to remodel the ones at Hősök (Heroes) Square, originally

built in in 1896 to commemorate the thousandth anniversary of the Hungarian conquest of the Carpathian Basin. In 1989, the statues of the Holy Roman Emperors were replaced with other important national leaders, and a tomb honoring the Unknown Soldier.

Heroes Square is surrounded by a beautiful park, the Museum of Fine Arts, the Palace of Art, and the Serbian Embassy. During the summer the lake is dotted with watercraft, and ice skates gliding on top in winter. It is also the site of the first underground subway station in all of Europe.

As we walked back to our hotel, we stumbled upon a small Hungarian restaurant, Pater Bonijac Etterem. Once inside, the waitress/owner Monika stopped by to take our order. I ordered a chicken dish. She rolled her eyes and exclaimed, “Why you order that? You don’t want that. I bring you what you want!” and off she went. And she was right. She delivered a large plate of chopped veal and her version of potato dumpling for me, and a Gypsy-style meat stuffed crepes typical to Hungary (Hortobagyi Palacsinta) for Joel. Every bite was better than the last.

We decided to take public transportation, then a local taxi to the world famous Formula One Grand Prix racetrack. While most of the track was closed the day we visited, there was a spirited go-kart race happening on one part of the compound, and in another, Hungary’s largest waterpark.

Back in Budapest, we decided to walk along the Danube River which separates Buda from Pest. While admiring the Buda Castle compound across the river, we came upon an interesting grouping of bronze old-fashion shoes on the waters’ edge. It looked like dozens of folks had slipped off their shoes before going for a swim.

We learned later from a tour guide that the shoes are a memorial commemorating the execution of Hungarian Jews by the fascist Arrow Cross members during World War II. The Fascists took the Jews to the river and ordered them to remove their shoes, so they could be used by others, then shot in such a way that their bodies fell into the river.

On our way to Buda Castle, we walked along the river to the very impressive Hungarian Parliament. Directly outside is Kossuth Square, a large square with monuments, classical buildings and an underground memorial to the Revolution of 1956. Across the river are Budapest’s most famous landmarks; Fisherman’s Bastion, Buda Castle and Liberty Statue.

Atop the hill is Fisherman’s Bastion, built in 1902 on the foundation of a 13th century church. From one of its seven towers, there is an amazing panoramic view of Buda. For the price of meal, one can sit on the Bastion’s terrace walls and enjoy the view.

At the base is the famous Buda Castle. After being almost completely destroyed by Soviet forces at the end of World War II, the castle was painstakingly rebuilt according to historical photos and paintings. The castle is now a museum, where it is possible to see some of the castles recreated furnishings. A 700-car garage is being constructed underneath the grounds.

Because we wanted to see other sites not accessible by public transportation, we decided to hire a car for our trip to Vienna. First stop: Slavin, Solvakia, which provided us with a birds-eye view of Bratislava, Austria and Hungary.

Our driver was Gyuri, a moonlighting professional soccer player who had been a high school exchange student in upstate New York. He spoke excellent English, and drove a late model sedan. First stop: Slavin, Solvakia, which provided us with a birds-eye view of Bratislava, Austria and Hungary.

On our way to Devín Castle in Bratislava, (which was destroyed by Napoleon in 1810) we drove over the famous UFO bridge over the Danube river that was built in the late 1960s and early ’70s during the height of Soviet Communist propaganda building spree. It features a flying saucer-shaped restaurant at the top of the bridges only pylon, the largest such bridge in the world.

Our favorite stop was Carnuntum, a Roman army base established in the first century. Over the years, Carnuntum grew to be an important outpost of the Roman Empire, and was the site where the Emperor emeritus Diocletian and the co-emperors Maximian and Galerius granted freedom of religion for every citizen of the Roman Empire.

It is now an Archaeology Park where they have rebuilt The House of Lucius, complete with period furniture, heated floors, heated baths, and water-flushed latrines. You could say life was good for the generals, and the merchants of Carnuntum. They loved their baths, as do citizens of Budapest, who keep four city bath houses hopping.

LISTING TO THE RITES