Here I am, jogging along and waving to my fellow Olympians, jumping over the hedges and passing a small group of musicians, the third bunch today. I pause to drop a dollar in their cup and then slyly take out two. Up ahead, I’ll have a beer and a bench, and watch the sun set behind the smog-laced skyline. Why is that jerk behind me honking? Maybe it’s because I’m actually not jogging here, but stuck in traffic, for the Pierce Elevated is still a major expressway through downtown Houston—an engineering marvel, a daily route for hundreds of thousands and an eyesore. But I can dream.

I-45 runs from the Galveston Causeway northward to Santa’s workshop. It’s the main north-south route that links Dallas to Houston, and Houston to Galveston. The Texas Department of Transportation (TxDOT) studies from 2013 show that this interstate in north Houston saw 272,000 vehicles a day. Meanwhile, the population of the Houston-Galveston region is expected to increase by an estimated 3 million from 2000 to 2035. Clearly somebody should do something to help the flow of vehicles, and there is, indeed, a huge, enormously expensive plan afoot, or acar. Though the entire project would stretch for about 16 miles, it’s the southernmost four miles that concern us. Most of this section of the road looks like any other interstate, with bent guardrails, potholes and the occasional flattened raccoon. But this section loops west of downtown Houston and thus is called the West Loop. No, wait. It’s raised above Pierce Street and called the Pierce Elevated, with few on or off ramps. Once you get on it, you must stay on till you die. 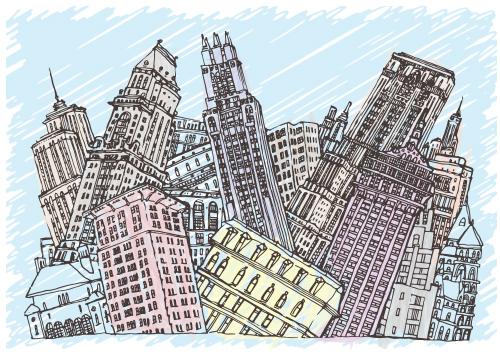 Rather, it’s the Pierce Elevated (can we call it the PE to save ink?) that is dying. TxDOT is proposing to reroute I-45 to the east side of town, where people don’t vote. The overall plan would cost $6 billion and take approximately a millennium to complete (construction is due to start in 2017, good luck), at which point, like the Gulf Freeway, construction starts all over again. Among the many speed bumps for motorists, bikers and the more daring squeegee window wipers is this: The reroute would cut off roughly four miles of the PE, leaving it high and dry, or at least moist.

TxDOT has conducted studies, held town hall meetings and conducted more studies. But that parade pales in comparison to what comes next, because no organization can foot drag and (excuse the cliché) kick the can down the road like the City of Houston, Harris County and TxDOT. (El Camino Real may soon be paved.) The mayor will appoint a Blue Ribbon Committee to discuss the matter. This requires offices, furnishings, secretaries, a wet bar and a suite at NRG Stadium. The county will do the same, followed by the Army Corps of Engineers with proposals and lawyers filing lawsuits. Then come more town hall meetings in which the city’s lunatic fringe drones on for hours, hoping to gain at least a 15-second sound bite on the evening TV news. “NASA could use it as a launchpad to Mars, except that man wasn’t meant to fly.” And: “We can tell tourists that it is an ancient Roman viaduct and point to the carving on the side: ‘XXV BC.’”

Next, experts are hired to study the architecture, and environmentalists will be brought in (for a price, of course) to see if any prairie chickens are nesting in the rafters. By then, there will be a complete turnover of City Council members who will want to give their own advice. Wait. Hold everything. We can no longer refer to this upstairs roadway as the Pierce Elevated since it won’t be a street. This sucker needs a new name, so nothing goes forward until a contest is held for the best title for the former elevated freeway. Top contenders are the Houston Flyover, Houston Hangover, Concrete Solution and Graffiti Gulch. The Greater Houston Partnership, always looking for the commercial angle, calls for a bidding war. That’s how the Gallery Furniture Esplanade and Sofa Center comes about, outbidding Houston Endowment’s offer to underwrite the entire project and rename it the Jesse Jones Ski Jump.

LATTE WITH A PINCH OF PETROL
The PE has been in hot tar since it was first proposed in the 1950s and finally built in the 1960s. Supporters viewed the project as being a balcony, or a moving observation platform, to view the city’s skyline. One press report gushed: “On opening day of the roadway, leaders happily trumpeted the ‘magnificent view of the business district’” that the road gave. With its elevated position, they claimed, the driving experience was “almost like going up in a cable car.” It was a great view of the Houston skyline, even more so today. But what driver is stupid enough to glance off the road to view the silhouette? Others objected to the space beneath the elevated. In a Texas Architect article from 1966, critic Patrick Horsburgh called the space beneath the elevated “psychologically intolerable” and doubted that any real form of urban life could occur beneath it.

That brings us here, below the PE. One report years later observed: “Artist’s renderings made playing basketball and eating lunch underneath a highway seem possible, if not downright enjoyable, only the parking element of their vision came to pass. For the last 40 years parking has been the only major use of the spaces beneath the downtown highway.” Today nothing has changed. Just parking lots and concrete poles to hold up the elevated, broken up by cross streets and weeds. It’s hard to visualize anyone visiting boutiques, a Starbucks and eating at a sidewalk café while Peterbilts hauling pipes to offshore rigs rumble loudly overhead. What were they thinking?
If this route is replaced by another one over to the east, it had better be built to hold half the cars in Houston on 16 lanes. Each way. I am driving south on the PE viewing signs posting the speed limit at 60 mph. Occasionally I get up to 25, for the road is bumper to bumper, and it’s two o’clock on a Sunday afternoon. No wonder the PE needs help. In a report by the Kinder Institute at Rice, engineers noted: “Thirty years after it was opened, the wear and tear of years of supporting 100,000 more vehicles daily than it was originally designed for gave rise to frequent shutdowns and resulted in ever-increasing repair costs (averaging $500,000 per year).” In 1996, a major overhaul, which cost $28 million, was made to the PE. Traylor Brothers was awarded the contract and completed the project in 160 days (30 days early), earning an early completion bonus of $1.6 million—a record high for TxDOT.

Read the rest of this article in the 2016 Spring H Texas issue, available soon on newsstands and digitally.

SEEN OF THE CRIME

FILLED UP OR FED UP?