Bordering On the Ridiculous

THE MAP – They are all here: Houston, Austin, San Antonio and El Paso, except they read San Antonio de Bexar and El Paso Del Norte. Dallas didn’t make the cut. This map was published by Chas. Knight & Co, 22 Ludgate Street, London. It is entitled, “Central America including Texas, California and the Northern States of Mexico.” Bet you didn’t know you lived in Central America.

By what is shown here, “Lorado,” S. Augustine, Waco Village, Santa Fe, Fort. S. Francisco, Comanche Indians, Apaches, and what is not shown besides Big D, Midland and Los Angeles, I am guessing this map was printed about 1840. Here’s the part that we should care about: there is no northern border of Texas. The east-west lines on the map run parallel, about 100 miles apart, to the north, then just stop near Pikes Peak.

Chas. Knight would have known where to draw that border had he waited a bit to steal a map from a Philadelphia printer named Samuel Augustus Mitchell. He liked details. That’s why he was the first map publisher in the United States to switch from copper plate engraving to steel. Steel produced finer details. According to Copono Press, which is selling reproductions, Mitchell’s map was printed in 1846 just after Texas joined the union (but before the Big Sellout, which we shall get to shortly). Original 1846 folding copies sell for over $10,000. 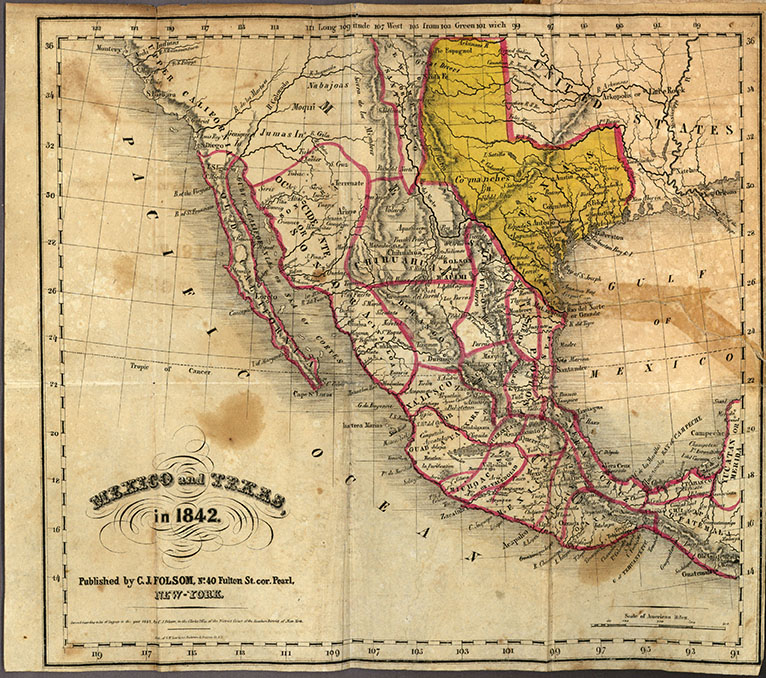 From Mexico in 1842: A Description of the Country, Its Natural and Political Features…by George Folsom. Courtesy of Dorothy Sloan-Rare Books, Austin, Texas

Here’s the inside skinny on why your ancestors really could ski Texas. Again according to Copono Press, “The founding fathers of the Republic of Texas had set their sights far in 1836. The republic they defined encompassed the entire eastern half of what is now New Mexico, including Albuquerque, Santa Fe, and Taos. The panhandle they described was in the shape of a stovepipe running all the way north to the 42nd parallel. Today the 42nd parallel makes up the borders between California and Oregon in the west, and between Pennsylvania and New York in the east. It runs through Lake Erie and Lake Michigan. In fact, Point Pelee, Ontario, lies just south of the 42nd degree north latitude, meaning that southern-most part of Canada lay south of northern-most Texas. Claiming the 42nd parallel placed the northern border of Texas in what is now Carbon County, Wyoming.”

To flex its muscle and show ownership in that vast land, in 1841 President Mirabeau B. Lamar on his own formed the Santa Fe Expedition made up of traders, with $200,000 in goods, soldiers and a Mexican guide who deserted them. They went by Wichita Falls and staggered across West Texas, arriving near Santa Fe where they expected to be greeted by eager business owners. Instead, they were forced to surrender to Mexican officials and were taken in chains as prisoners to Mexico City, suffering mightily. That did not stop Texas visitors, although today relatively few are taken in chains to Mexico City prisons. Indeed, half of Houston and most of Dallas have summer homes there to avoid the Texas heat. My mother had a friends who said she stopped going to Santa Fe in the summer. “Every time I walked down the street, I’d meet people I knew from Dallas.”

When joining the Union, Texas’ claim to such a vast wasteland was accepted by the feds in Washington, mainly because there was no there there except wild Indians, buffalo and ski bums. But soon things got sticky. The Mexican-American War established new boundaries, the whole free vs. slave argument came to the forefront, bills were introduced in Congress to split off the west part of Texas and make it a new state. When U.S. troops occupied Albuquerque, Southerners threatened to send their own soldiers.

Then the discussion turned to that great common denominator: money. The Republic of Texas owned a huge amount of lands, and retained them after Annexation. But it also owed a fortune to bond holders. So a deal was struck, the U.S. would buy the western third of Texas for $10 million. (I haven’t figured out how much that is an acre, but it’s got to be less than, say, what Highland Park or River Oaks runs.) At the end of the republic, its debt was officially estimated at $9,949,007, so Texas still had $50,993 left over.

The northern border of today’s Texas was due to the Missouri Compromise of 1820, which said that states above that line would be free and those below it could be slave, so if Texas wanted to hold on to any land above the line, it would have to free its slaves. Texas preferred slaves to land. Speaking of which, the compromise also maintained slavery in the nation’s capital, but the slave trade was prohibited.

That resulted in the silly Oklahoma Panhandle – one of its three counties is named Texas (pop. 20,640). The entire deal was called the Compromise of 1850 and avoided North and South from ever having to go to war. This land deal is often compared to the Louisiana Purchase. That transaction involved 828,000 square miles for cash, forgiveness of loans and interest on other loans, for a total of $15 million or $250 million today. It came to a little less than three cents an acre.

Today the boundaries of Texas are 2,845.3 miles long, but if you include the smaller meanderings of the rivers and the tidewater coast line, the boundary is 4,137 miles long and encloses 263,644 square miles of land and another 3,695 square miles of water surface. But think of the wide-open spaces, snow-capped mountains and vast miles of nothing that were, and still could be, a part of Texas. Without leaving the state, even with no passport, you could visit the home of the atomic bomb, Carlsbad Caverns, and those frozen vaults at Roswell where the government hides the bodies of Martians, if our forefathers hadn’t needed that pitiful $10 million. Today that will hardly rent a .300 hitting shortstop for the season.

HOOKED BY THE HORNS

IS THERE A DRAFT IN HERE?

FILLED UP OR FED UP?

Identifying Houstonians Explaining where you're from gets complicated

PIN THE BLAME ON THE DONKEY