If world-class golf, beautiful lakes and rivers, and delicious craft beer are things that interest you, put North Alabama on your bucket list. The folks in this area take the tourism industry very seriously and have made it a prime destination for Houstonians wanting to take an affordable but luxurious vacation.

In the early 1990s, a man named Dr. David Bronner managed the retirement systems of Alabama. He felt strongly that the state’s pension fund would stay healthy if its investments were diverse, and believed that building and operating a group of championship golf courses would be a sound investment. Somehow he convinced legendary golf course designer Robert Trent Jones to come out of semi-retirement to design the courses for this huge undertaking.

The original courses opened in 1992 and 1993, with seven locations and 324 holes of first-class championship golf. It became known across the golf world as the Robert Trent Jones Golf Trail (RTJGT), and has since expanded to 26 courses in 11 locations around the state. These courses were designed to challenge the world’s best golfers while still providing an enjoyable and memorable round for beginners and casual golfers.

Five of the locations are in Northern Alabama, between Birmingham and Huntsville. These courses are particularly spectacular because they incorporate the beauty of the many lakes and rivers in the area as well as the stunning Southern Appalachian Mountains. Elevated tees and greens with gorgeous panoramic views are common on these courses. Here are the details on two of the can’t-miss courses:

Silver Lakes
Located near Gadsen, AL, Silver Lakes is one of RTJGT’s premier locations, with 36 holes of forests, wetlands and grasslands. There’s a short course and three championship nines named Backbreaker, Mindbreaker and Heartbreaker. Surrounded by the Appalachian foothills and Lee’s Lake, they each provide their own unique challenges and beauty, and feature dramatic elevation changes. All 36 holes boast Champion ultra-dwarf putting surfaces.

Hampton Grove
This location outside Huntsville has two championship courses: the Highlands and the River course. It also features an 18-hole links-style short course. The Highlands course was renovated in 2008 and restored to its original Scottish links design; long-waving grasses frame rolling terrain and many fluctuations in elevation. The River course is mostly flat as it winds its way along the Flint River, and has the distinction of being the only RTJGT course with no bunkers. Before thinking that might make it an easy course to score on, take note that it has water on 16 of the 18 holes! The course features massive oak trees, including an enormous, 250-year-old black oak behind the 18th green, touted as the third oldest in the state.

Green fees along the RTJGT average $50; during peak season, the highest fee at most courses is $64.

There are other great courses to play in North Alabama that are not on the RTJGT. Twin Bridges Golf Club in Gadsen is a 6,800-yard layout set along the Coosa River featuring Bermuda fairways and bentgrass greens. This course is enrolled in the Audubon’s Silver Signature Sanctuary program, which integrates natural resource conservation with economic progress and community education. It has a beautiful clubhouse atop a bluff overlooking the river, and houses a fully stocked pro shop and clubhouse grill. After golf, head over to Local Joe’s at Little Bridge Marina. Relax indoors or outdoors and enjoy some of the best smoked barbecue anywhere. Get the ribs!

Heading north, about halfway between Gadsen and Huntsville, is Guntersville. It’s nestled along scenic Lake Guntersville, home to Guntersville State Park. Alabama has six state parks with lodges and golf courses. The lodge and convention center at this location is outstanding in every way: It sits atop a foothill overlooking the lake, and each modern room has its own balcony with incredible views, not to mention the amenities of a fine hotel. The dining room and cocktail lounge are also excellent.

Across the road is The Eagle’s Nest Course at Lake Guntersville State Park. This unique course sits on top of Taylor Mountain and offers golfers majestic mountain scenery. It has many elevation changes throughout the course; the fairways are wide but tree-lined, and welcome strolling deer from time to time.

Also located in Guntersville is a course that is a true masterpiece called Gunter’s Landing. Some of the views from the tees will take your breath away, as they overlook the mountains and the Tennessee River. The elevation changes are dramatic, and some of the par-3s are over gorges. The staff goes the extra mile to make your golfing experience one you won’t forget.

About 10 miles from Guntersville, in Union Grove, AL, is a treasure known as Cherokee Ridge Country Club. This beautiful tract features a 17-acre lake on the front nine and an 80-foot waterfall cascading into Lynn’s Creek on the back 9. The lush fairways are Bermuda, and the greens are bentgrass. The signature par-3 fifth hole features five separate tees with bulkheads on the lake—it’s a photographer’s dream. Cherokee offers lodging at the newly renovated seven-bedroom Lake House overlooking the course and the lake. This Cape Cod–inspired facility has all the comforts of home, including a full kitchen, conference room, bar and living rooms. The huge back patio overlooking the lake has barbecue pits, rocking chairs, cozy tables and chairs. It will accommodate 15 to 20 guests for group gatherings, family reunions or just a weekend getaway.

Free boat ramps and private marinas dot the lake’s perimeter, and so do great places to eat and drink. One of the best is Somewhere on the Lake in Guntersville. This place is a beach bar that’s nowhere close to a beach. Not only does it have a fun atmosphere, but it offers an excellent menu featuring a wide variety of entrées from grouper to prime rib. 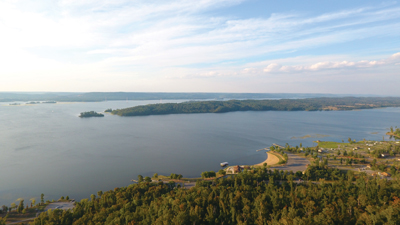 The lake is widely known as one of the best bass fishing spots in the nation. Large-mouth bass are the main draw for anglers but the lake also has an abundant supply of other fish including brim, crappie and catfish. Boating, camping, kayaking, hunting and eagle watching are also popular activities on and around the lake.

The Tennessee River runs from the northwest corner of Alabama down through the heart of north Alabama and back up to the northeast corner of the state. It has been dammed up to form several lakes, and provides recreational activities as well as commercial transportation use. Flint Creek is a major tributary along the river, and is utilized for many water sports near its confluence with the river because of the vast width of the creek and calm waters that are created by the sheltering geography.

The North Alabama Craft Brew Trail was unveiled in 2016 by the Alabama Mountain Lakes Tourist Association to invite beer enthusiasts on a self-guided tour of eight craft microbreweries. Each microbrewery offers tours of the facility and awesome taprooms, where their unique beers can be sampled and purchased.

Back Forty Brewery in Gadsen is one of the first breweries to open in the area, and is currently the largest producer of alcoholic beverages in the state. Owner Jason Wilson is a walking encyclopedia of beer. The tour here is amazing: Back Forty uses almost only locally grown ingredients in its beer, and recycles the grain used in production through local cattle companies and bakeries so the hamburger patties and buns served in the taproom are “coming home.” The brewery produces a beer called Cart Barn that’s the official beer of the Robert Trent Jones Golf Trail and is available at all their locations.

Yellowhammer Brewery in Huntsville is another mandatory stop. General manager and part owner Ethan Couch has built one of the best taprooms anywhere. In addition to the wide variety of award-winning beers offered, in 2015 the brewers paired the brews with popular former food truck Earth and Stone Wood-Fired Pizza to open a brick-and-mortar version at Yellowhammer’s new location. The result is a beer and pizza lover’s dream. Yellowhammer’s T-Minus Kolsch is a tangerine Kolsch named in honor of Tang, and is the official beer served at Huntsville’s U.S. Space and Rocket Center nearby. The center is an official NASA visitor center and home of Space Camp. It provides a great experience while in Huntsville.

North Alabama offers these great destinations and more. There is a Wine Trail, a Barbeque Trail, a Birding Trail and a Hallelujah Trail featuring historic churches more than 100 years old.

New Kid on the Block and Tackle