Traveling far and wide, appearing on Broadway and in a new hit television series—it all sounds exciting—but for Katy native Kearran Giovanni, her home is where her heart is.
by Sue-Ella Mueller 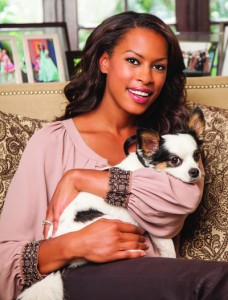 Broadway and television actress Kearran Giovanni has put down stakes on both sides of the coast, but at heart, she’s still a Texas girl.“I’ve lived in New York and now in LA, but Katy [Texas] is where I grew up. It’s where my dad and my brothers and their families live and where so many of my friends still live. Katy is my home,” Giovanni says.

Best known for her role as Dr. Vivian Wright on One Life to Live, but now making a name for herself as Detective Amy Sykes on TNT’s hit show Major Crimes, the 5’7”, Giovanni was the beautiful girl-next-door in the Katy neighborhood of Cinco Ranch. A dancer, gymnast, track star and head cheerleader at Taylor High School, she says she had a “pretty great childhood,” but just about the time she was to enter her senior year, her dad, who worked for Halliburton, was transferred to Venezuela.

“I didn’t want to move,” she says. Her love of dance and the opportunities available in Houston for dancers, convinced her parents to let her stay back in the States. “They told me if I could get into the Houston School for Performing and Visual Arts [HSPVA], I could stay,” says Giovanni. “I made it in for dance and it was a really great school. It was small compared to Taylor’s 3,500 students. There were only about 130 people in my class and you got to know everyone. It was very open-minded and diverse; I had my eyes opened a lot.”

It was at HSPVA where Giovanni’s eyes were also opened to the idea of pursuing her love of dance as a career. “At the end of our senior year, HSPVA set up these ‘mini-auditions’ for us in front of colleges from all across the country. That’s when I met Professor Richard Hess from the College-Conservatory of Music at the University of Cincinnati. He told me ‘I think you can do this. I think you can work in musical theater.’ I believed him and I got into his program and was like a little puppet. I did whatever they told me. It was four years of intense acting. I ended up graduating with a bachelor of arts in musical theater.”

Giovanni credits the university with setting her on the right path to stardom. “Before graduation, we did a 55-minute showcase for casting directors. There were 12 of us in my graduating class. The casting directors were given a list and they circled who they wanted to sign. We got to skip the search for an agent, bypassing one of the hard parts,” she says. “The school taught us much more than just about our craft. They taught us how to be our own business, how to move to New York, how to mingle and how to brand ourselves. I’m not saying you can’t go to New York without a degree, but it just takes a little longer to land a job and meet the right people.”

Giovanni did indeed meet the right people. She began appearing on Broadway the moment she landed in New York. She worked on productions such as Lion King, Sweet Charity and Hugh Jackman: Back on Broadway. And it wasn’t long before she began being cast for television roles on shows including Royal Pains and Law and Order. In 20009, she was selected for a major, recurring role, Dr. Vivian Wright, on the soap opera One Life to Live.

“At the time, I was performing in Guys and Dolls and doing One Life. I was working two to three days a week on the soap shooting about 50 scenes a day and then doing the musical at night. I did that for three years until the soap ended,” she says. “It was a fast-paced world; like speed dating for TV. But I can memorize stuff now pretty easily. You don’t have a choice; you have to learn your lines, so you train your brain to do it.”

The training apparently paid off for as soon as the last episode of One Life to Live ended, other television shows came calling. “I was performing in Anything Goes when I read the script for Major Crimes. I loved it and I told my husband it was the perfect role. During my first audition, Meg Simon [the casting director] was a mama bear, giving me tips and I made it past the first round. They wanted me to go to LA to do a screen test, but the stage manager for the Broadway show said ‘Well, sweetie, I don’t think that’s going to work.’ That’s the harsh side of Broadway. I was heartbroken,” Giovanni remembers. “But they were willing to let me do the screen test via Skype in New York to the director in LA. All the girls in the show were so sweet, waiting with me, like a gaggle of geese. When I made it past the network, they asked me to fly out to LA. I thought I was going for one more audition, but they had me meet them at lunch, which was a little strange. Am I going to have to audition right here at the table? Instead, they said, ‘Welcome to Major Crimes. We wanted to tell you in person.’ I was crying and they were laughing. It was a ridiculously storybook ending.”

Giovanni, her husband and their two young daughters had to pack up everything they owned and make the move from coast to coast within a month’s time. Despite leaving the Big Apple, Broadway, her husband’s family and many good friends behind, it was a role of a lifetime for the actress. Giovanni’s character on Major Crimes, a spin-off of TNT’s The Closer series, is Amy Sykes, an ambitious undercover police detective and military veteran.

“She’s funny and smart but also quirky and a bit socially awkward. She doesn’t know when to hush and says whatever comes to mind. I’m a little bit similar to her—I was that girl in class that always had her hand up. I can’t help it. I just want to shout I know the answer, pick me. Amy is like that and everyone just rolls their eyes at her, but in the end, she is usually right,” says Giovanni.

During its initial season, the show shot 10 episodes and was recently picked up for a second season. “They thought we’d do okay, but our numbers were great! We’ll start filming the next 15 episodes in March,” she says.

That gives the mother of two something she rarely got when she was working in musical theater—time off. “I miss the instant gratification of Broadway; being able to see the audience and whether they are happy or moved. I heard that familiar ‘five minute’ call for ten years and everyone was there waiting in the wings to go on. I miss that part of Broadway,” Giovanni says. “But I don’t miss working eight shows a week, missing out on weekends and nights with family and friends. TV is good. I’m still doing something I want which is creating a character, but I have a life. I get to spend time with my family and be a wife and a mom. I love being home.”

Catch her on CW’s Beauty and the Beast as she guest stars as Police Commander Joe Bishop’s wife Thursday, February 21, and tune in to Major Crimes’ second season beginning July 2013. You can also watch the first season of Major Crimes in its entirety on Netflix and at www.tntdrama.com/series/majorcrimes/.

THE HEAT IS ON

9th Annual Feast with the Beasts at the...