Even for the Architecturally Challenged Tourist 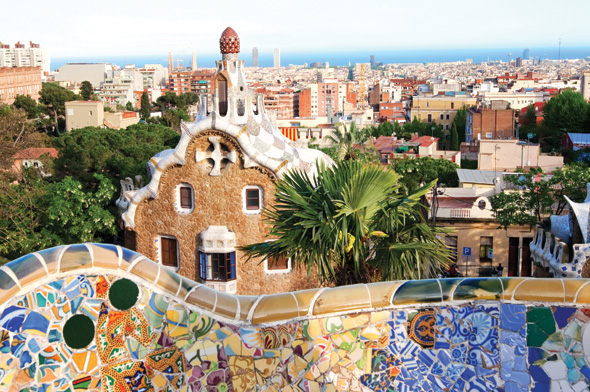 Barcelona, the second largest city in Spain and the capital of the Catalonia region, is a Mediterranean coastal town encircled by beautiful beaches and lush mountain tops. For footballers, or rather soccer enthusiasts, it is best known as the home of one of the top European teams, FC Barcelona. The cosmopolitan city boasts of its incredible restaurants, shopping, tapas bars and nightlife. However, without a doubt, this is a city for the lovers of design, engineering, building and art deco; it is an architectural paradise.

Indisputably, the 1992 Summer Olympics breathed life back into this town which can be traced back to more than 2000 years. The original glory to some of Barcelona’s oldest and most famous buildings including several built in medieval times was restored as facades were scrubbed and renovated. Equally important were the buildings, facilities and stadiums needed to be constructed for the many venues. Planners and designers were careful to maintain the architectural integrity of the city. Together, the old and the new structures of the City of Barcelona encompass a wealth of eye pleasing sights that envelopes tourists into the deep culture and traditions of the community.

Admittedly, I am not well-versed on the history of architectural styles or the artistic relevance of structural design. But even I was blown away by the pure majesty of La Sagrada Familia, one of the most visited tourist attractions in Barcelona. The massive Catholic church has been undergoing construction since its inception in 1882 and not expected to be completed until sometime in the first third of the 21st century. Built entirely from privately donated funds, La Sagrada Familia represents the work of more than 40 years of renowned architect Antoni Gaudi.

Hovering above the church, there are currently eight spires or bell towers with ten more yet to be built, representing the 12 apostles, the four evangelists, the Virgin Mary and, the tallest spire, Jesus Christ. The artistry created by Gaudi in the spires, the moldings, the archways, but especially in his depiction of the Nativity façade truly left me breathless. The joy in Gaudi’s stone-carved faces at the birth of Christ was as moving and emotional to me as the anguish and pain depicted in the second façade, Passion. A third façade, Glory, is currently under construction and, for me, will be worth a trip back to see.

Tearing our group away from La Sagrada Familia was not an easy undertaking and was only done so amidst promises of seeing other works of Gaudi’s (a name I had never heard of before coming to Barcelona, but now the essence for my awe of the city). Among my favorite stops along the Gaudi tour was the Park Guell. There, we were greeted by a colorfully-tiled, water-breathing dragon guarding the entrance to this amazing park. From the gatehouse, which to me resembled a Dr. Seuss image come to life, to the Salon of the Hundred Columns (there are really only 84) seemingly growing straight up from the ground, and finally to the curved, mosaic-tiled benches allowing for the perfect view of the entire city of Barcelona, this is worth the effort that is needed to walk the many miles of the park. Filled with brilliantly colored tiles throughout, the park is a feast for the eyes. 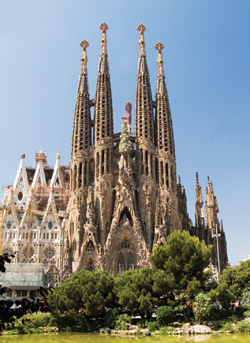 Working my way towards becoming an art aficionado, I made the jump from Gaudi to Picasso quite easily. Pablo Picasso, while not a Barcelonian native, spent a portion of his youth here and returned later, splitting time living in Barcelona and Paris during his adult life. His love of Barcelona was evident in his desire to establish his art museum here, a dream which was fulfilled after his death by his secretary Jaume Sabartes and with donations of his work by his widow, Jacqueline Roque. Walking among his creations, including work from his Blue and Rose periods, instead of just seeing them in a book, and reading the exhibit on his personal life, I felt as if I had gotten a glimpse inside the mind of the famous Picasso. There is something to be said for looking at art through your own eyes instead of that of a photographer’s.

The Gothic tour of Barcelona was another one of my favorite events for this trip. Many of the buildings along the narrow streets of this area are from medieval times. With a mind geared toward historical fiction, it was easy for me to step back in time among the flying buttresses of the Gothic churches and the ornamental facades of the stone buildings that now house tapas bars and quaint cafes. The cobbled roads were just one more escape path for me from modern reality to the days of the Counts of Barcelona.

Hoping back in to the future, our group garnered a ride in a TRIXI, a bicycle cab and popular form of transportation, and made our way along the beach fronts to prime shopping on the Las Ramblas. Las Ramblas is a pedestrian friendly avenue and is probably the most famous boulevard in Barcelona. The outdoor vendors and supermarkets leave your mouth watering for a taste of the local culture. Beware though, while we were not hit, we heard many a tale of pick pockets looking for prime targets among the many tourists.

As night descended upon the ancient city, we were drawn to the beautiful light show of the magic fountain. As a traveler, a lighted fountain with dramatic water effects is not a new spectacle, but the sheer size of this fountain along with the fact that I am a kid at heart, made this an enjoyable way to pass a few hours before heading off to one of the many fabulous restaurants of Barcelona. 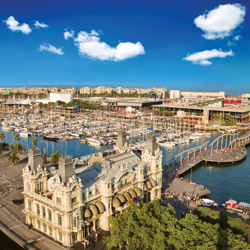 Among our many other adventures in this Mediterranean metropolis were visits to the Olympic stadium, the National Art Gallery of Catalunya, Passeo del Born, Santa Maria del Mar Church, Santa Caterina Market, the Museum of Contemporary Art of Barcelona, Casa Mila and La Pedrera. Finally, over-dosed on architecture, art and Barcelona history, we made our way to one of the most beautiful beaches in Europe. Basking on the golden sand, bathing in the minimal surf and soaking up the perfect temperature, I knew then and there why this was the beloved city of both Gaudi and Picasso. Barcelona is a Spanish treasure whose worth can only be known through experience.

The Ties That Bind

The Search for Manatee