Other-worldly underwater adventures, exhilarating Jeep safaris and world-class spas will put a smile on your face.

Views like this from the Radisson Aruba are guaranteed to make you grin!

“Mushy donkey” was what I heard when our concierge thanked my wife and I for the comment we made on the natural beauty of the Radisson Aruba Resort, Casino and Spa. I soon learned that the term was really “masha danki,” and means “thank you very much” in Papiamento, the strong native tongue that’s still prevalent amongst the many languages spoken on the island of Aruba. Another two-word term we’d soon become familiar with: “bon bini,” or, “welcome” to the place known by the locals as “One Happy Island.”

With just a little over 100,000 inhabitants on the island, Aruba boasts more than 90 different nationalities. Although the official language is Papiamento (derived from an eclectic mix of many languages and evolving over many centuries), you’ll find that most Arubans are also fluent in English, Spanish and Dutch.

Aruba was first inhabited by Indians who came over from South America in small sea vessels more than 400 years ago. The Arawak tribe arrived in about 1000 AD and settled in just a few small villages. Around 1499, the Europeans, led by the Spanish explorer Alonso de Ojeda, arrived. Prior to the Eighty Years War between Spain and Holland, the island had changed hands several times, however, around 1636, the Dutch took possession and, other than a short time during the Napoleonic Wars when the English briefly took over, have remained the strongest influence.

My wife and I began our adventures in Aruba with breakfast on the beach at The Ritz-Carlton Aruba, where we were pampered with local fare, including The Cake, a beautifully packaged and ridiculously decadent chocolate cake made with Grand Marnier. (It makes for a great souvenir for loved ones, since it freezes so well.)

After our bellies were full, we headed to our next stop, De Palm Island. The private tropical paradise is perfect for a relaxing day of sunbathing or for thrill-seekers, thanks to the spectacular new water park.

The waters surrounding the island are teeming with abundant aquatic life, including blue parrotfish, making an underwater adventure a no-brainer. We sprung for the all-inclusive package, including Sea Trek, which brings a group 20 feet below sea level in zero gravity; all you have to do is put on an underwater helmet that feels weightless under the ocean’s surface. My wife and I were able to feed the several species of fish, as well as take numerous photos along the 375-foot-long path of man-made reefs and also of our underwater “dining” experience at the Sea Trek Café.

Another underwater option: snorkeling. We didn’t have much experience with the sport, so we opted for SNUBA, an underwater breathing system that combines snorkeling and scuba. With a system that enabled us to dive down 20 feet with only our swim fins, masks and breathing apparatus, the SNUBA system delivers air through a long hose from tanks that lie on the surface of the ocean in pontoon rafts.

But if you’re a scuba diver with ample experience, Aruba’s entire southern coast, a coral reef known as the wreck-diving capital of the Caribbean, boasts more than 20 dive sites and 10 diver-friendly wreck sites, such as numerous planes, boats, ships and historic vessels like the Antilla and the Perdenales. Shore dives are also possible off De Palm Island, Pos Chiquito and Baby Beach.

For a much needed midday “break in the action,” we stopped at a local eatery, Zeerovers, located in the small town of Savaneta, where visitors and locals alike watch the restaurant owners prepare freshly caught fish. It’s truly a dining experience witnessing the catch, processing and cooking methods that all come together right before your eyes.

Another delight after a day out in the heat of the Aruban sun was my first experience with the national beer, Balashi, a clean, crisp-tasting afternoon libation that is sure to please. In only 15 years of existence, Balashi has already achieved international recognition, winning the Gold medal in 2001 and the Grand Gold medal in 2004 in the Monde Selection in Brussels. You can even take a Balashi Brewery Tour, offered daily on a catwalk over the production floor of their modern plant where they are capable of bottling 15,000 bottles per hour, making them one of Aruba’s best home-grown products. We ended our busy day with a gentle sunset cruise aboard a Red Sail Sports catamaran. 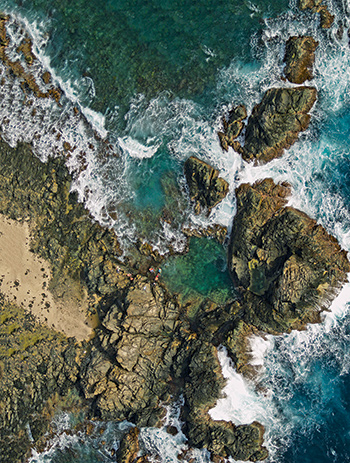 The following morning, we awoke to the sounds of the Radisson’s macaws and other tropical birds. Be sure to check out the bird show every day at 11 a.m. near the towel hut, where you get to personally meet the “Bird Man” and some of his numerous tropical birds.

After our morning bird “greetings,” we decided to take a trip to the Arikok National Park, where our hosts, ABC Tours, guided our party on a Jeep safari that I will not soon forget. Not for the faint of heart, this adventure is sure to rattle even the most adventurous traveler. Make sure to buckle up and keep your hands inside the Jeep; this exhilarating ride through some of the most historic sites of the natural preserve covers almost one-fifth of Aruba’s surface area. The park contains three geological formations that support the indigenous plants and wildlife. The original settlers, the Caquetio Indians, left their mark on the numerous granite rocks—you can find original drawings that date back at least 1,000 years.

The park also encompasses Mount Jamanota, Aruba’s highest point, reaching 620 feet, where you can find underground Indian caves, sand dunes and limestone cliffs scattered along the coast.  Because of the strong undertow and crashing waves, swimming is not recommended on the windward side, but the beaches are amazing and the natural bridges formed more than a million years ago are another must-see while visiting Aruba.

At Dos Playa—essentially, as the name implies, two coves carved out of limestone— my wife and I were able to experience something for the first time in our lives: Conchi, the Natural Pool, a tranquil setting with waves breaking on the rock formations behind you, allowing you to swim through the calm, crystal-clear waters.

Before the tour ended, we traveled to an area called Ayo, where the rock formations are of a very mysterious origin. We also explored the Casibari Rock Formation, a large desert rock garden in the center of the island that conjures up many myths as to how these formations came into being. 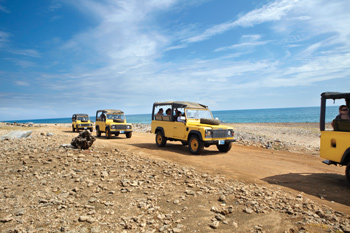 A bumpy, yet unforgettable jeep tour down the coast.

The Life of the Party

As nighttime arrived, our group decided to stop by a favorite cocktail-hour lounge, Blue, at the Renaissance Aruba Resort & Casino, where we shared a few cocktails on the balcony patio overlooking the ocean. The stop at Blue helped all of us to recover from our Jeep safari and to regain our composure prior to our dinner at Carpe Diem and our night out on the town with the Kukoo Kunuku Pub Krawl bus tour, which put us right back into the same predicament we experienced on the Jeep tour: a little shaken up and feeling good but with a slight headache to follow. Not ones to usually partake in the bar-hopping scene, my wife and I found ourselves singing along to the latest dance music until the early-morning hours.

The next day started with a much-needed trip to the Radisson’s The Larimar Spa, named after a rare Caribbean gemstone, and truly a great find. The 13,000-square-foot flagship facility features a welcoming lobby, treatment rooms, a steam room, an outdoor relaxation area and a large fitness center. The staff pampers you with care and expertise and makes you feel like you are the only client of the entire day—we loved it!

Most of the other resorts we visited have their own spas on property, offering everything from aromatherapy baths and refreshing facials to invigorating mud wraps and hot stone massages. Many treatments feature local aloe and cactus, plant extracts, desert mud sea salts and other indigenous restorative substances. Spa venues include luxurious treatment rooms and airy private gazebos. We loved Spa del Sol, located at the Playa Linda Beach Resort, overlooking the beach. They also have a location at the Caribbean-Balinese beachfront facility at the Manchebo Beach Resort & Spa.

Whether it’s cultural pursuits, water sports, nightlife, or just comforting relaxation you’re looking for, Aruba is the place to go. It won’t take long before you understand the meaning of “One Happy Island.” Just don’t be shocked when one of the friendly locals finishes a conversation with the term “dushi.” It’s a term of endearment that affectionately means sweetie or honey. Masha danki, Aruba—you are now my dushi of the Caribbean!

Roth IRA or Traditional IRA? Which one is right for you?

TOP OF THE ROCK

Island Adventure The Galapagos Islands: An Eden in...