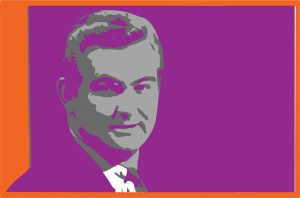 Through winding streets in Tanglewood, behind a gate, are a number of townhouses, one of which belongs to Dave and Laura Ward. It’s a lovely home with a small swimming pool—Dave says it’s been years since he’s used it. On the walls of the rooms are several plaques, including the Silver Circle, an Emmy from the National Academy of Television Arts and Sciences – the Lone Star Chapter. And this: It was presented by the Guinness World Records, which usually bestows such honors to the tallest man, the largest cucumber and Harnaam Kaur, of Slough, Berkshire, England, whose beard is six inches long in places, making her the youngest woman with a full beard. Then there is Houston’s own Dave Ward. Why is he included? Because, as the plaque reads, he holds the world’s record of having the longest career in television news broadcasting—49 years, 218 days, from November 9, 1966 to June 2, 2016, and the meter kept running until he finally left the anchor desk at KTRK on December 9. (His contract went to the end of the year, but he had vacation time.)

Getting into Guinness isn’t easy. “It all began when Lieutenant Governor Dan Patrick, who used to be a sportscaster on Channel 11, was in our station for one reason or another, and stopped by my desk and asked how long I had been at KTRK. I told him about 50 years, and Dan said, ‘Dave, nobody in this business has done that. You ought to be in the Guinness book.’ So the station contacted the company, and they wanted all kinds of verification—letters from two people who had been here when I was hired, my work records, everything. Then last June, they contacted us, and said I was in.” Now that Ward, 77, no longer needs to grind the daily grind, he and his wife plan to take a trip to California some day—he likes long-distance train trips. “My father told me when I was a little boy, ‘Dave, passenger trains are the only civilized way to travel.’” But he is not going to sit back on his sofa and play with the remote. “He’s not retiring. He’s looking forward to the next chapter in his life,” says Laura. (To follow Dave Ward after he left KTRK, “like” his Facebook page, Dave Ward’s Houston.)

“I was 27 years old when I made it to KTRK. Shortly after I got there, we received seven brand-new state-of-the-art black-and-white TV cameras, and I thought, Well, I guess it will be a while before we get color.” In recent years, his role at the station was diminished. He stopped doing the 10 o’clock news programs two years ago, just hosting the six o’clock news. “I just got tired of coming to work.” Since he worked evenings putting together the 10 o’clock news, “I now get to watch some evening TV. I am so fortunate Houston has been so good to me. I’ve interviewed five presidents, starting with Dwight Eisenhower. I’ve covered space shots, got to ride in a jet fighter, so much.”

He lives about 15 minutes from the station with Laura, his third wife. Ward has four children from his previous marriages. Laura has three. He used to smoke cigarettes and cigars, from the age of 14. “Then I quit until one day Marvin [Zindler] came in smoking the most wonderful-smelling cigar, and I started all over again. But I quit again.”

As for his opening lines: “I started each program with, ‘Good evening, friends,’ because Ron Stone, who I considered the best TV anchor in Houston, always began with, ‘Howdy, neighbors.’ I wanted an opening like that.”

Is TV Going to Work?

How Ward got to Houston and to Channel 13 is circuitous. David Henry Ward was born in Dallas, although his family didn’t live there. “My mother wanted to give birth in a major hospital, so she went to Dallas.” His father was a Baptist minister who moved his family around East Texas, eventually becoming minister of the First Baptist Church in Huntsville. Young Dave began his radio career with KGKB radio in Tyler while attending Tyler Junior College. Three years later, he joined the staff of WACO radio in Waco as a staff announcer. “WACO is the only radio station in America whose call letters are the city’s name,” Ward notes. A year later, he became that station’s program director.

“At that station, I was a DJ spinning Vaughn Monroe and Elvis. The station’s news director was Bob Vandiventer who taught radio news writing at Baylor University. He would bring some of his students to the station to get hands-on training, and I would see these five or six people in the news department busy, all inspired, having a great time, while I was across the glass just spinning those records, and I thought, That looks better, so I got into the news side, but I never finished college.”

In 1962, Ward came to Houston as the first full-time news reporter on KNUZ/KQUE. “Growing up in Huntsville, it was almost like coming home.” His Houston broadcasting debut was as a night-news reporter for the radio stations. Ward’s career at KTRK began in 1966 as an on-the-street reporter/photographer.

“I was hired in a pool hall,” Ward says. “I was working at KNUZ, and a friend at Channel 13 told me there was an opening. Would I be interested? So I met with the top people at the station, General Manager Willard Walbridge, Program Manager Howard Finch and News Director Ray Conaway at Le Que, a pool hall, where they went for lunch several days a week and to shoot some pool. I was hired then and there. The station only had eight people in the newsroom back then. Today we have about 120. I took a pay cut from about $650 a week at KNUZ to $575 at KTRK. My father was not that enthusiastic about my move. He asked me, ‘This television thing, are you sure it’s going to work?’” After his stint as a street reporter, early in 1967, he began to anchor Channel 13’s weekday 7 a.m. newscast. Later that year, he became the first host of a game show, Dialing for Dollars, which later evolved into Good Morning Houston. In January 1968, Ward was promoted to co-anchor of the weekday six and 10 p.m. newscasts with Dan Ammerman.

“At the time, Ron Stone was on Channel 11, and they had 50 percent of the audience,” recalls Ward. “We were hot and we said, ‘We’re gonna kill them.’ No. We were a poor third, but we slowly climbed up in the ratings. Ammerman left, and I inherited the anchor slot solo. By ’72, we were getting there. When Jack Heard was elected sheriff in 1972, the first thing he did, on New Year’s Day, was to fire Marvin Zindler. We had the story at six. Marvin had been in the Consumer Fraud Division of the sheriff’s department, and I told our assistant news director, ‘We ought to hire that guy as a consumer fraud reporter.’ No other station in town, and maybe in the nation, had someone assigned to only that. I asked Marvin if he’d like to come here and basically do the same thing. He said, ‘Dave, there’s nothing I’d rather do.’ When Marvin came aboard, we took off.”

By 1973, Channel 13 was number one in this market. It held that spot through ’76, ’77 and ’78, and on through the years—a dynasty in the TV biz. During that time, Ward has co-anchored with Shara Fryer, Jan Carson and Gina Gaston. In 1974, Ward suffered a motorcycle accident at the Astrodome during a charity race. He had broken his pelvis in four places, had a concussion and much, much more. “I was in the hospital for seven weeks and received between 40,000 and 60,000 notes. I didn’t have anything else to do, so I answered them all. All of them were supportive except one, which read, ‘What, Ward? Drinking again?’”

In 2003, he was in a car wreck—crashed into an out-of-control SUV on the West Loop, and broke his right leg. Once Ward and his wife attended a wedding, got food poisoning, and Ward was out for two weeks. Then a long-simmering abdominal pain turned out to be diverticulitis. He underwent major surgery and was away for two weeks. Not that anyone should feel sorry for the anchorman. Ward makes a good living. He walks into a nearby room. “I wanted this to be a poker room. Laura wanted a wine cellar.” It’s a really nice wine cellar with 400-year-old doors from Europe, fine oaken wine racks, shaved slate walls. “I spent more on this room than I did on my first house. I once thought that it would be good to make six figures, $100,000 or more, a year. Today I pay more than that to Uncle Sam.”

Then there was the time Dave & Co. probably helped topple a banana republic dictator, Anastasio Somoza. In the 1970s, Nicaragua was hit by a deadly earthquake. Aid was pouring in, and Houston wanted to help, so KTRK organized a relief effort, recruited Houston firefighters to drive five 18-wheelers packed with food, water, blankets and other necessities. It took them months to get through all the borders and red tape, finally arriving in Nicaragua, where Dave and a cameraman met them to film a 30-minute documentary, An Odyssey of Mercy. After leaving Nicaragua for home, the group discovered that the Somoza regime had seized all the supplies and sold them in the markets. The natives found out and riots erupted. Somoza and his family fled the nation. “I always thought we helped start it.” Maybe we will see another entry in the Guinness World Records: “TV Anchor to Topple Most Dictators: Dave Ward.”

Things you should know about Dave Ward and Houston TV:

To the Houston Beat

PUTTING THE TEXT IN TEXAS

SHIP WITHOUT A FULL DECK

Do We Even Care About Dallas?