All Aboard for a Spectacular Rail Experience 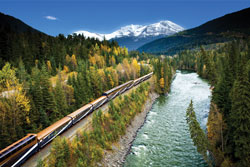 For more than 20 years, The Rocky Mountaineer has been leading historically significant tours through the majestic Canadian Rockies.

Trains hold a special place in Canadian history. In fact, it was the completion of the transcontinental rail that attracted British Columbia to join the Canadian Provinces instead of the United States of America. Today, you can retrace the steps of early explorers—in the lap of luxury.

The mountain experience begins in Vancouver, a city nestled between the Pacific Ocean and the Coast Mountains. The new Fairmont Pacific Rim hotel is home base as you await pickup for your unique rail experience.

Bagpipes wail amid the hustle and bustle of the Rocky Mountaineer rail station as guests board and climb to the second level of the train, the glass-domed luxury coach.

On day one, the train chugs from Vancouver, through the fertile Fraser Valley and scenic Fraser Canyon to Kamloops in British Columbia’s semiarid interior. The skylit coach is the perfect perch to view the rivers, forests, small towns and, if you are traveling in fall, the salmon run and changing foliage. One of the Canyon’s true highlights is Hell’s Gate, where water torrents through it at its narrowest point.

As the train follows the South Thompson River out of Fraser Canyon, the first of many bald eagle sightings occurs. Throughout the trip, guides recant Canadian history as it relates to the rail and point out wildlife along the tracks. It’s enjoyable, spectacularly scenic and educational.

Bring your appetite! After a welcome toast from the crew, the downstairs, white-linen dining area is open for breakfast. Go for the poached egg served over Montreal stuffed meat or traditional buttermilk pancakes. Pace yourself, because before you know it, lunch is served. Enjoy wild British Columbia salmon and Alberta pork tenderloin as the train approaches the sleepy rail town of Kamloops, where you spend the evening and prepare for the second leg of the journey.

The second day is exceedingly more beautiful as the train ascends into the heart of the Canadian Rockies. This journey gets you up close and personal with the mountain wilderness where cars can’t go. Departing Kamloops through vast ranchlands and past Craigellachie, where the “last spike” was driven to complete the Canadian Pacific Railway in 1885, the train goes through Rogers Pass with tunnels, glistening glaciers and snowcapped mountains. You’ll travel through numerous tunnels as the train spirals its way up the mountains and over the Continental Divide, before heading down the eastward side of the Canadian Rockies toward the city of Banff, Alberta.

Banff, one of North America’s most scenic towns, is postcard-picturesque. Our train adventure ended in Banff National Park, a UNESCO world heritage site, where visitors enjoy the rugged raw beauty of an unspoiled landscape, pristine mountains and lush wilderness.

For more than a century, “The Castle in the Rockies” has provided luxurious comfort, individualized service and timeless beauty for the most discerning traveler. Styled after a Scottish baronial castle, The Fairmont Banff Springs is located in the heart of Banff National Park. Take a quick and pleasant walk (or shuttle ride) to one of the quaintest downtowns in North America and enjoy the slow pace of mountain life. Learn about Banff’s earliest settlers at the Whyte Museum of the Canadian Rockies. Get back to the Fairmont’s Waldhaus Restaurant for dinner; you’ll feel like you’re dining in the Swiss Alps.

So You Think You Know Houston?

The 9 Biggest Diet Mistakes (And How Not to Make Them)

The Culinary Wonderland of Calgary

The Magical Island of Fano