I  sneak out to my garden every evening looking for progress. Until recently progress had slowed; it picked up after I did some tree trimming. I return from a three day trip to North Texas to find my pot boiling over! Cucumbers that were barely noticeable when I left are huge, some over a foot long. I picked 23 tomatoes from my Celebrity vine. Peppers are big and ripe, okra pods cover all three young plants and my two eggplant bushes net 8 fruits. Emotionally I swing from celebrating, to being overwhelmed. What the hell am I going to do with all this stuff?

I planted with recipes in mind, I just didn’t realize everything would ripen at once. And, this is a busy time of year for me; not a lot of time to be playing in the kitchen. I decide to do the easiest, funnest project first. I zip down to Pier 1 imports and purchase a 1.5 gallon, spouted drink dispenser. I hit the H-E-B on the way home and pick up some whole, peeled garlic cloves and visit Spec’s, I need vodka! 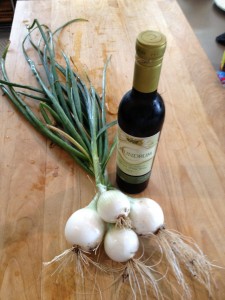 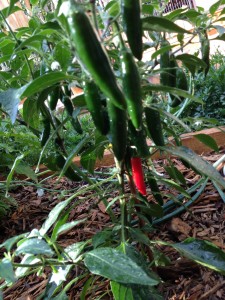 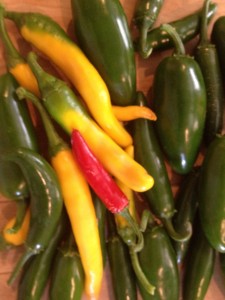 I got this idea from Woodrow’s on Durham. They have a big urn filled with veggies and vodka- great in bloody Marys. I throw 12 ounces of peeled garlic cloves into the pitcher, add a layer of jalapenos and cover those with dozen of my smaller onions. Then more layers of peppers: habanero, serrano, cayenne and finally poblano. Even with the pitcher crammed full of veggies, it takes nearly two big bottles of Teto’s to fill the decanter. This will be ready to start consuming in a few days; the peppers should last for months as long as they stay covered in vodka. 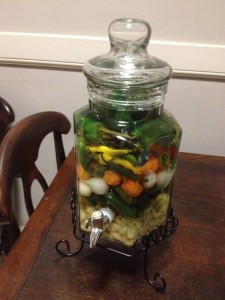 My next project involves the cucumbers. I’m going to combine them with onions and peppers to make Bread and Butter pickles, hopefully with a bit of heat to them. 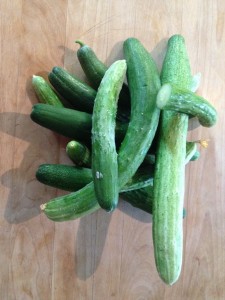 The Bloody Marys were a hit around the pool on Sunday! I combined a 50/50 mix of Clamato and Mrs & Mr T’s Bloody Mary mix with the infused vodka. Finished with Worcestershire, Tabasco, celery salt and fresh ground black pepper. Served over ice in pint glasses garnished with celery and olives. The infused vodka added intense depth and flavor.

I served the pickles with home smoked Texas brisket and potato salad (homemade; store bought ingredients).  The pickles were well received, however, they had little to no heat. I’ll use hotter peppers in the next batch. Guests left with little jars of pickles.

The garden is still giving. Upcoming projects include eggplant, okra and tomatoes. 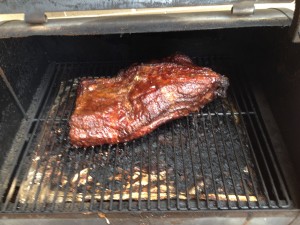 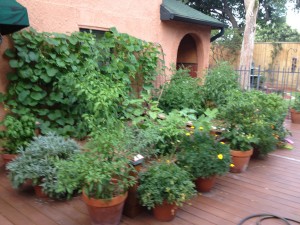 Cool Down in One of Houston's Public Pools!

Beginning to Sow and Worry

Garden Bounty Banquet, for One

A Chance to Farm

How Hard Can this Be?

I'm Home to See My Babies