Houston’s Zina Garrison, a former tennis star, celebrates the 20th anniversary of free tennis programming for children at her academy. 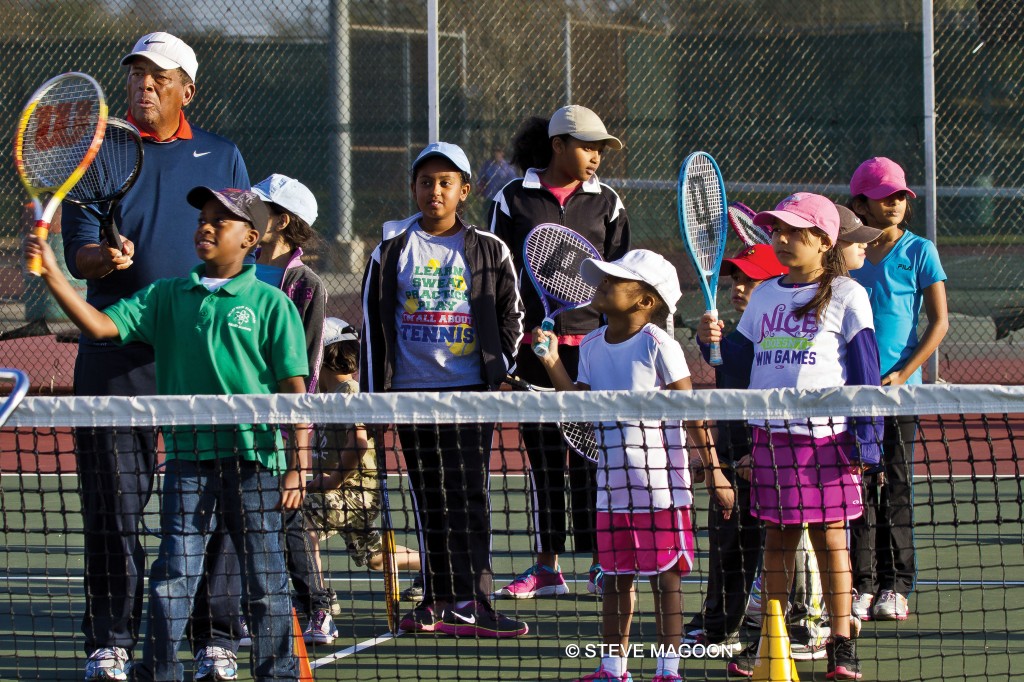 What comes around, goes around.

Growing up in Houston as the youngest of seven children, Zina Garrison spent a good deal of time trailing after her older siblings. On one such occasion, having been banished by her brother from his baseball practice, Zina wandered over to watch a tennis match on a nearby court at McGregor Park. That’s where she met John Wilkerson, a man who would change her life forever.
“Do you want to try hitting the ball? What else are you doing but just using God’s air?” Wilkerson asked her. Up for the challenge, Zina choked up on the racket and hit the first of many balls under Wilkerson’s tutelage.

“I got pretty good,” recalls Garrison. “And then [actor] Bill Cosby came out to the courts to speak to us. There were about 100 kids and out of all of them, I got picked to hit with him. It was so cool. From then on, I didn’t want to do anything else.”
Garrison went on to turn pro at the age of 18, giving African-Americans as well as Houstonians a tennis superstar to idolize. Still working with Wilkerson, over the next 10 years, Garrison earned 14 major singles titles and some 20 doubles titles, including an Olympic bronze medal in singles (1988), a gold medal for doubles (1988) and the Australian Open and Wimbledon in mixed doubles (1987, 1988).

Just as Wilkerson was willing to give Garrison her start, she in turn has been launching young players from Houston through the Zina Garrison Academy (ZGA) since 1993. To date, more than 30,000 children have been reached through the program.
“John had given me so many years to play the game for free, I wanted to do the same,” says Garrison. Together, with her coach, Garrison set up ZGA, offering local children free tennis lessons, with some life lessons sprinkled in for good measure. In July 2012, Garrison’s childhood friend and longtime doubles partner, Lori McNeil, who also made a name for herself in tennis—she was once ranked as high as number eight in the world—came on board as ZGA’s new pro. “We’ve come full circle; we are all back together again,” says Garrison.

This year marks the 20th anniversary of ZGA and Garrison plans to celebrate in a big way. “We’ve had incredible people here supporting me and the kids in this venture. I have been blessed with a phenomenal board [of directors] and Linda Elliott, our executive vice president, has done a great job keeping the program going,” credits Garrison. “We all have a passion for the game and we all want to share that with the kids. We want to help them do well not only on the court, but also in the classroom.”
Garrison and the people behind ZGA are ready to take the program a step further and are hoping that they can raise enough funds to build a bigger site in conjunction with the KIPP Academy. In November, Garrison’s 50th birthday will coincide with the 20th anniversary celebration. A huge gala is being planned for November 16 at the Houstonian. “It would be a great birthday gift if we could generate the funds we need for our new site,” says Garrison.

Houstonians can now fly direct to Istanbul on Turkish Airlines, one of the world’s fastest growing airlines.

“The direct flights to Istanbul will strengthen trade, investment and tourism ties for Houston in Turkey,” says Houston Mayor Annise Parker. She recently led a trade mission to increase economic relationships between the two markets.

In an interview with H Texas, Turkish Airlines’ Chairman of the Board and Chairman of the Executive Committee Hamdi Topçu talked growth. “Our airline has grown more than 20 percent each year and now serves 98 countries. Turkish tourism is increasing as people discover our best hotels, the Aegean Sea and plenty of history,” he said.

Topçu says the future looks even brighter, “When people come to Turkey for commerce, they come back with family. We are the gateway to Africa, the Middle East and all of Europe.” He believes the high quality of service will keep people flying Turkish Airlines.

Houston was a natural expansion choice for Turkish Airlines. Houston is the fourth largest U.S. city in terms of population and home to thousands of Turkish residents, creating an immediate passenger base.

For Your Arts & Entertainment

An Act of Faith