A Damper on the Day

THE DEN – Have you ever had one of those days? The Astros lost, the Texans lost, the Longhorns are dreadful. Oh, and did I mention that my house flooded? The residence is a soggy mess, with everything wet, moldy and/or ruined. I blame the hurricane, of course, and the U.S. Army. But let me give you some background so the same disaster won’t happen to you. A few months ago I did a story on Houston’s water – rain, swamps, drinking and floods. One section dealt with the bayous and the dams, specifically Barker and Addicks dams west of Houston which were built to protect the city after two devastating floods inundated the downtown in the 1920s.

During the interviews, officials from both the Harris County Flood Control District and the U.S. Army Corps of Engineers assured me that the dams, although more than 70 years old, were in prime shape. That seemed right, because dirt and rocks and concrete don’t age. Then Harvey arrived and the rains came, and came, and came. The hurricane was not a hurricane in the usual sense, at least not in Houston. There were no 120 mile-an-hour winds, no tide surge, just rain. That was no big deal here in my neighborhood of Running Rats Acres. It rains here a lot, but even Tropical Storm Allison, which dumped up to 36 inches on parts of the town, didn’t bother us. Our streets all end in a cul de sac (French for dead end) a few hundred feet from Toxic Bayou, which never floods. Water never even reached beyond the top of the curb, so no one around here was worried. Other parts of town started to flood, but not us. TV news showed cars with only the rooftops sticking above the water, but not here. Canoes and kayaks appeared on our screen floating down in streets and freeways. We were safe.

The water level actually began to drop, then began to rise again, and crept even higher, to the top of the curb and then up the front yard, an event we had never witnessed before. Higher and higher, but this made no sense. Why did the flood level drop, the rise? This brings us to the U.S. Army. It seems that the two dams were getting swamped, the water level behind the barriers was getting dangerously high, so they – get this – started releasing more water, which caused the bayou down at the end of the street to spill out of its banks and through the neighborhood. I mean, what’s the point of having a dam to prevent flooding when authorities open the flood gates to flood the town? Am I missing something here the Army knows that I don’t? So the water level, which had actually been receding, began to rise up past the curbs, flow across the front yards, to the door steps and into the houses. The dirty green lines on the walls show how high the water came — two feet. 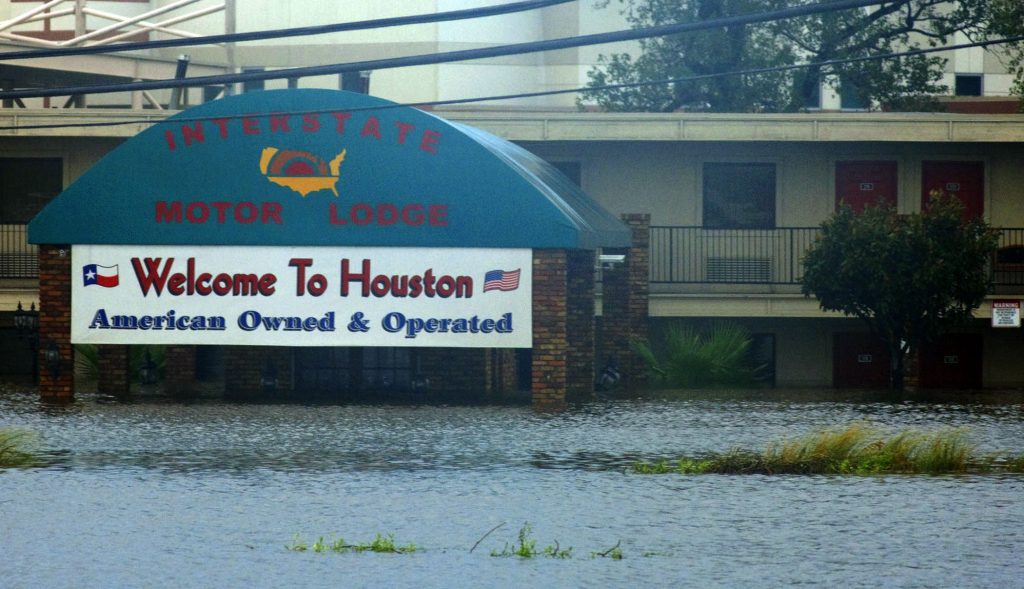 That was the highest level of the water, but it seeps upwards into furniture, beds, sheetrock, hanging clothes and cabinets. Floors buckle, drawers stick, then power goes off so that everything in the freezer and refrigerator starts stinking. Speaking of which, the entire house begins to smell. Some say it’s the aroma of backed up sewage. My father’s wonderful old huge oaken roll-top desk which I planned to leave to my lawyer son is warped, stained and bleached white two feet up. Everything in it is soggy, or I guess so since the bottom three drawers won’t open. Sorry son. My computer is ruined, so is my wife’s. Techie nerds are always telling up to back up everything on our computers in case our hard drive fails. No one mentioned to back up in case of a national rain record of 52 inches. Clothes are wet and stink and need to be dry cleaned, but my cleaners says she is so busy she will only take one load per customer a day. She must be, well, cleaning up. Books are the worst. Clothes can be cleaned or tossed and replaced, but most books are a total loss. The pages stick together and rip if you try to pull them apart. The late comedian George Carlin had a routine about his “stuff,” objects he received along the way that he kept for no particular reason. I have mountains of stuff, and I’ll bet you do, too. Here’s a small flag from the French Foreign Legion I got in Marseilles. A paperweight. Who uses or even has a paperweight? Old newspaper clippings, clothes I haven’t worn since Y2K, more stuff. If there is anything good to say about a flood it is that we have to get rid of unneeded stuff. My children and grandchildren were a huge help in moving the heavy stuff, and things really got moving when one grandson brought along his high school football team. Huge guys.

We were told that sheetrock is soggy up to 4 feet from the ground, and must go, so everyone is knocking out walls up to 4 feet, then hauling the mess out to the curb. Running Rats Acres is Baghdad on the Bayou – soggy planks, sheetrock, couches, chairs, stacks of junk – and looked even worse after the flood. Some nice folks even set up a canteen for the neighborhood with bottles of water, Clorox, all sorts of snacks, and one fellow set up his barbeque pit and started handing out hamburgers. There was some other good news as neighbors got to know neighbors, total strangers showed up to help. I noticed next door at the Birdbath’s house that movers were hauling out his gun collection, liquor cabinet and big screen TVs. Later I found out that Birdbath had not hired any movers.

Another positive point is that I have flood insurance from FEMA. I’ll use the money to hire a good flood insurance lawyer and one who can take on the Army Corps of Engineers.

Ashby is wet at ashby2@comcast.net

THE YEAR OF OUR DISCONTENT

SEEN OF THE CRIME