As Texans, we’re about cowboys, cattle, and oil; it’s crucial we have the attitude of a bull and the pride of a rib-eye steak. Coincidentally, the same down-home bravado exists in Alberta, Canada and I was lucky enough to experience it first hand. Located in on the Canadian Rockies just north of Montana, the province is known for it large size, reliance on oil, plethora of cattle, and world-famous rodeo, just like Houston. With the Houston rodeo long gone and the heat of July setting in, I headed north to the world’s largest assembly of cowboys and cowgirls—the Calgary Stampede. 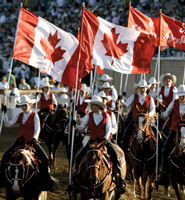 After a direct flight from Houston, I checked into the sumptuous Hotel Arts in the heart of the city. This boutique hotel is located downtown; it’s moments away from shopping, the theatre, and a bevy of restaurants. Our lavish room was decked-out with upscale furnishing, contemporary décor, 42˝ plasma screens, and an indulgent pillow-top mattress. Within walking distance to the Calgary Stampede, the hotel was the perfect home base for my wrangler adventures.

Like a tried and true Texan, my first quest was to find a warm, buttery, melt-in-my-mouth steak. Alberta has over 3 million head of cattle and is famous for high-quality beef. I decided on the highly recommended Vintage Chophouse and Tavern. During the short walk from the hotel to the restaurant, I couldn’t help but notice all the people in downtown Calgary sporting white cowboy hats; I felt right at home. Calgary not only has a Go Texan day, but the entire city dresses in western attire throughout the Stampede. There’s something special about eating a delicious steak surrounded by cowboy boots and cowboy hats while visiting our northern neighbor.

The next morning I scoured the city to find the hot spots Albertans go to get outfitted in official Canadian western attire. While the signature hat for the Calgary Stampede is a white Stetson made in Texas, my pick was the Canadian-made Smithbuilt hat—a fitting pick considering I was in Canada. Every mayor of Calgary has presented a Smithbuilt hat to visiting politicians, celebrities, and athletes since World War II. Donning my new hat, it was time for a fresh pair of cowboy boots. When looking for boots in Canada there is no better choice than the company tapped to outfit the Royal Canadian Mounted Police—The Alberta Boot Company. Their boots have graced the feet of royalty, movie stars, athletes, and now, this Texas cowboy.

Dressed in my new attire, I headed downtown where country music was echoing through the streets. I followed my ears to a live band playing at Buzzards Cowboy Cuisine, the perfect place to grab some grub. There was a hearty barbecue buffet, but the real cowboy treat was a spread of Rocky Mountain Oysters. It was Texas all over again when the crowd at Buzzards hit the dance floor for the two-step. I fit right in making my rounds among the friendly people of Calgary. Dance partners to do-si-do with were plentiful.

The next day started off with a free citywide breakfast of flapjacks and sausage. What’s more inviting and more Texan than free food? The entire city is invited to breakfasts held in various locations throughout the city. I looked around at the sponsors and noticed familiar oil companies with sites in Calgary and Houston. After breakfast, I hoped aboard a wagon drawn by a team of horses and headed to the main attraction, the Calgary Stampede.

Unlike the Houston Livestock Show and Rodeo, the Calgary Stampede is comprised of three events each day—a rodeo, a concert, and the chuckwagon races. Bob Tallman, the same announcer for Houston’s show, announced the rodeo. After the rodeo, the stadium is reconfigured for the Evening Show. The show begins with a rocking musical performance by The Young Canadians, a group of kids who work all year to put on musical theater performance. The show ends with a God-Bless-America-worthy fireworks display to usher in the main event of the Stampede, the chuckwagon races. The excitement of the chuckwagon races should be on every Texan’s to-do list. Riders saddle up on top of horses and race their wagons along a figure-eight track spanning longer than a mile. Yee-haw!

If you’re feeling post-rodeo depression after our Livestock Show and Rodeo is over, head to Calgary this summer. It’s the perfect place to escape Houston’s summer heat, gorge on a gorgeous steak, and fit right in with the cowboys. After all, what’s better than Texas? Nothing. But, the closet thing I’ve ever seen is the Calgary Stampede in Canada.

The Spa at Four Seasons Provence