What do Sam Donaldson, Nolan Ryan and Dwight Eisenhower have in common? No, they were not brief members of the Trump cabinet. They were all born in Texas. So were Debbie Reynolds (El Paso), Joan Crawford (San Antonio) and Tommy Lee Jones (San Saba). Actually, the entertainment industry is filled with our former neighbors: Carol Burnett (San Antonio), Gary Busey (Goose Creek), Cyd Charisse (born Tula Ellice Finklea in Amarillo), Spanky McFarland (Fort Worth), Steve Martin (Waco). And what would the musical world be without Texans? Willie Nelson (Abbott), Trini Lopez (Dallas), Selena (Lake Jackson), Larry Hagman (Fort Worth) didn.t sing but his mother did, Mary Martin (Weatherford). Who can forget our favorite singing Longhorn, Janis Joplin (Port Arthur) or the Big Bopper (Jiles Perry “J. P.” Richardson, Jr., (Sabine Pass). We also have Beyonce (Houston), Ernest Tubb (Crisp) and Tommy Tune (Wichita Falls). Ragtime composer Scott Joplin (Texarkana) was re-introduced to millions in “The Sting.” Speaking of films, Humphrey Bogart never did say, “Play it again, Sam” in the 1942 film “Casablanca.” The line, “Play it once, Sam,” was spoken by Ingrid Bergman. Sam was played by Dooley Wilson who was born in Tyler. Notice that you never see Sam’s fingers on the keyboard. That’s because he was a drummer. 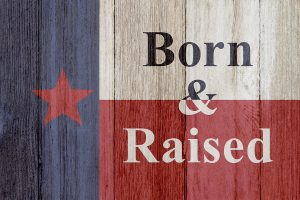 The military has more than its quota of Texans. While Adm. Chester Nimitz (Fredericksburg) commanded the Pacific Fleet in World War II, Gen. Dwight Eisenhower (Dennison) commanded all Allied troops in the European and African Theater. An interesting story about Ike. He thought he was born in Abilene, Kansas, where he grew up, and put down Abilene as his birthplace on his application to West Point. When Ike became a famous five-star general, a lady in Dennison thought she remembered baby-sitting littlie Ike at the Eisenhower home there. (I’ve visited the house, a tiny, humble place.) Ike was surprised to learn he was a native Texan. The most decorated soldier in World War II was Audie Murphy (Kingston). He could also be listed in the Hollywood category because, after the war, Murphy made more than 40 movies and a TV series. This military thing is traditional: “. . . the Texians being entirely a military people, not only fought, but drank, in platoons.” — Western Monthly Magazine, October, 1838. Nobel laureate John Steinbeck, in “Travels With Charley” observed: “Among other tendencies to be noted, Texas is a military nation. The armed forces of the United States are loaded with Texans and often dominated by Texans. Even the dearly loved spectacular sports are run almost like military operations….Sectional football games have the glory and despair of war, and when a Texas team takes the field against a foreign state, it is an army with banners.”

While it is interesting to learn that so many famous people hail from the Lone Star State, it is also interesting to learn that most of the founders of Texas came here from other places. Sam Houston and Stephen F. Austin were born in Virginia. William B. Travis and James Bonham came from South Carolina. James Bowie was from Kentucky. The Alamo defenders came from 20 states and six countries. There were only 11 native Texians at the Alamo and they couldn’t speak English. Twenty-two of the defenders just appeared, and no one knows where they were born. At San Jacinto, the Texas Army came from 24 states, 11 countries, and Texas. The only native Texians were 30 Tejanos from San Antonio. “A scene singularly wild and picturesque presented itself to our view. Around 20 or 30 campfires stood as many groups of men: English, Irish, Scots, Mexicans, French, Germans, Italians, Poles, Yankees, all unwashed and unshaved, their long hair and beards and mustaches matted, their clothes in tatters and plastered with mud. A more savage-looking band could scarcely have been assembled.” Some things never change. All these newcomers give fresh meaning to the bumper sticker; “I’m not from Texas, but I got here as soon as I could.” This also includes Dr. Michael DeBakey (Lake Charles), Walter Cronkite (Saint Joseph, Mo.) and Roger Clemens (Dayton, Ohio).

Getting back to those who were born here, the Texans have rather dominated the evil media, especially the TV news. We have Dan Rather (Wharton). Then there are Bob Schieffer (Austin) and Scott Pelly (San Antonio). Lou Dobbs is not from Childress but from “Childress County.” When it comes to athletes, we can’t list them all. Nolan Ryan (Refugio), Ben Hogan (Stephenville), A.J. Foyt (Houston), most of the NFL, Roger Hornsby (Winters), “Babe” Didrikson Zaharias (Port Arthur) and a newly pardoned Jack Johnson (Galveston). Incidentally, Johnson fits into a sub-category: BOI. That’s Born On the Island (of Galveston). The BOIs are very proud of that, although most are descendants of Jean Lafitte.

Only two U.S. Presidents were born here, Ike and Lyndon Johnson (Stonewall). Since Jim Hogg, most of our governors were Texan-born. George W. Bush was an exception. (New Haven, Conn.) In other areas, we have Dr. Denton Cooley (Houston), former U.S. Supreme Court Justice Sandra Day O’Connor (El Paso), H. Ross Perot (Texarkana), Katherine Anne Porter (Indian Creek), Howard Hughes (Houston), painter Robert Rauschenberg (Port Arthur) and Gene Roddenberry (El Paso). Who was the first white female to be born in Texas? It could be Mary James Long, or maybe not. On December 21, 1821, Jane Herbert Wilkinson Long gave birth to Mary James on Bolivar Peninsula, and throughout Jane Long’s life she claimed to having given birth to the first white baby in Texas, and was called “The Mother of Texas.” However, censuses between 1807 and 1826 reveal a number of children born in Texas to Anglo-American mothers prior to 1821. Stephen F. Austin is called “The Father of Texas,” and he once romanced Jane Long. Hmmmm.

Take Me to Your Litter

CAMPING IN THE PRESENT TENTS